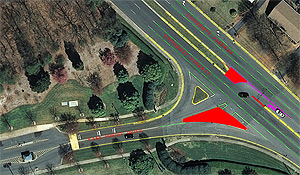 During the holiday break, the city of Winston-Salem will eliminate left turns onto northbound University Parkway at entrance of our campus to improve safety. This difficult intersection has had 45 accidents in the last five years, most recently involving a pedestrian Wake Forest student who was seriously injured when struck by a passing vehicle. This change will be effective sometime in January 2013.

“The Department of Transportation has determined that this intersection needed a redesign to improve safety and reduce accidents,” said Jim Alty, associate vice president of Facilities and Campus Services.

The Winston-Salem department of transportation will change the concrete curb at the exit gate so vehicles leaving the University will no longer be able to turn left onto northbound University Parkway. All vehicles will be directed to turn right or southbound onto University Parkway. 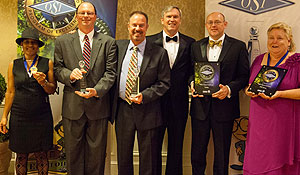 The awards come in the third year of Wake Forest’s transition to a new cleaning management system called OS1, which provides a higher level of cleanliness and better accountability in cleaning buildings. About half the University has transitioned to this system, including most of the academic buildings. 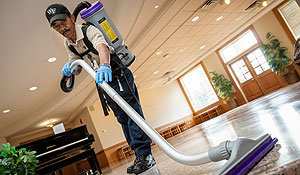 The Simon Institute, a nonprofit organization that supports the cleaning industry, has nominated Wake Forest for 11 Cleaning Industry Awards – the most ever for the University.

“There’s a total of 16 awards, and we’re nominated in eleven categories,” said Jim Alty, the associate vice-president of facilities and campus services. “This group actually comes to campus and scores our buildings on cleanliness.”

Alty said that Wake Forest has been transitioning to a new cleaning management system called OS1, which provides a higher level of cleanliness and better accountability in cleaning buildings. About half the University has transitioned to this system, including most of the academic buildings.

“Two years ago, we were nominated at our very first symposium and won best rookie program,” Alty said. “This group benchmarks custodial operations at places like Boeing, Sandia National Laboratories, state governments and other universities.”

The award winners will be announced at the national OS1 Symposium in New Orleans on August 6th.

Need to know more about registering your vehicle for on-campus parking, or want to send us feedback? Click here »

“We’ve had more than 300 students, faculty and staff agree to short-term solutions to alleviate parking problems in the spring semester created by the construction of two new residence halls and a dining center,” said Alex Crist, director of parking and transportation. “Now we have created a long-term plan that will start with students re-registering their cars this summer for the fall semester.”

Crist outlined this plan at a Campus Connections meeting that drew about 250 people to Benson Center on May 3. It’s a plan that he has been developing with Jim Alty, the associate vice president of Facilities and Campus Services, through meetings with Student Government, Faculty Senate and the Staff Advisory Council in the last few weeks.

Here’s what to expect this fall: END_OF_DOCUMENT_TOKEN_TO_BE_REPLACED Read more