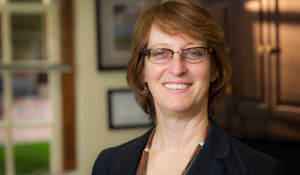 Dean of the College and Reynolds Professor of Computational Biophysics Jacque Fetrow has been appointed Provost at the University of Richmond.

As Dean since 2009, Fetrow’s tenure has been marked by a strong reaffirmation of the College’s signature tradition of close student-faculty engagement, with support for the URECA Center, development of the Office of Academic Advising, and fundraising to support initiatives led by the Associate Dean for Student-Faculty Academic Initiatives. Her support for Wake Forest’s teacher-scholar model has been integral in U.S. News & World Report’s 11th place ranking for “Best Undergraduate Teaching” this year, as well as the school’s highest-ever ranking among national universities at 23rd.

“Jacque has been a much-valued steady hand at the helm during turbulent times for a liberal arts education nationally,” said President Nathan Hatch. “I have prized her leadership and integrity, as well as her good counsel on all matters affecting the College as well as Wake Forest as a whole.”

Fetrow has been a central figure in Wake Will: the Campaign for Wake Forest, helping to secure over $180 million in gifts and pledges for student scholarships and financial aid, faculty and departmental support including facilities improvements, and strategic initiatives. She also made great strides in aligning the College’s financial and budgeting processes with evolving University systems, and extensively reorganized the structure and management of the Dean’s Office and College more broadly.

“Jacque has been a key partner in virtually every significant issue and initiative arising at Wake Forest since I arrived in 2012,” said Provost Rogan Kersh. “I will greatly miss her creative imagination, her knack for envisioning positive solutions to problems within our budget constraints, and valued friendship.”

Throughout her deanship, Fetrow has sustained an active research program, closely involving both graduate and undergraduate students – including Wake Forest’s 2012 Rhodes Scholar – in her landmark work on protein structures and functions in the drug discovery process. She and colleagues in computer science developed a course that won the Wake Forest Teaching and Learning Center Innovative Teaching Award in 2006.

She currently serves as Secretary-Treasurer of the Protein Society, and is on the Board of Directors of QuantumBio, an early-stage biotechnology software company. Prior to coming to Wake Forest in 2003, Fetrow served as chief scientific officer and director of GeneFormatics, a biotechnology software company. She also served on the faculties of the Scripps Research Institute and the University at Albany in New York. She earned her Ph.D. in biological chemistry from Pennsylvania State University and her B.S. at Albright College.

At the University of Richmond, she will also hold an appointment as Professor of Chemistry. She will begin her term on July 1.

Senior Associate Deans Rebecca Thomas and Randy Rogan, along with Associate Deans Anne Boyle, Christy Buchanan, David Levy, and José Villalba, will continue to work with Dean Fetrow in leading the College’s regular operations. A search advisory committee will soon be named to begin the process of choosing a successor as Dean of the College.

Fetrow appointed to second term as Dean of the College

President Hatch and Provost Kersh are pleased to announce that Wake Forest College Dean Jacque Fetrow has been appointed to a second term in this vital role. Dean Fetrow took up her post in January 2009, and has presided over a historic set of College achievements, including WFU’s highest-ever ranking, significant expansion of our superb faculty of teacher-scholars, and an array of innovative new or rejuvenated programs across all academic divisions.

“Jacque has been both a strong, creative voice in helping shape our university-wide goals and progress and a tireless advocate for College faculty, students, and staff,” said Provost Kersh. “I’ve found her counsel invaluable and leadership steadfast; it’s genuinely rewarding to work so closely together.”

Dean Fetrow has also taken a central lead in the ongoing ‘Wake Will’ capital campaign; of our $600 million goal, well over half is sought for investments in the College, including student financial aid, academic programs and facilities, and faculty support. 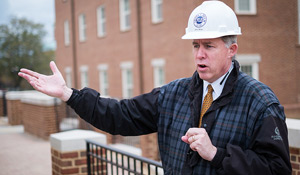 Although the new North Dining Hall is not complete, sections of the new building are open beginning today (Tuesday, Dec. 3), and the campus community is invited to come and check out the new facility.

The new Starbucks and the P.O.D. Market on the lower level will be available from 7 a.m.-9 p.m., and the general seating throughout the building will be available 24 hours a day (including during final exams this semester).

There are a few remaining items to complete for full opening in January, including the completion of the two primary food venues – Bistro ’34 and The Hilltop market – as well as landscaping, fixture installations and final furniture delivery.

To support the College’s initiative to provide increased study space, the building’s general seating will be available for 24-hour study, social and community use during the final two weeks of the semester, and this availability will continue in the spring semester.

“I am truly appreciative of the collaboration with John Wise and others who have helped to make this new dining facility and its 24 hour accessibility possible,” said Jacque Fetrow, dean of the College. 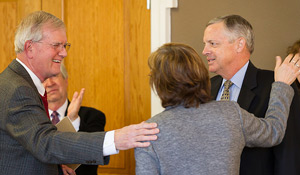 The heart of the Wake Forest experience has always been lasting relationships, fostered by our intimate setting and warm community.

In their combined service of more than 66 years at Wake Forest, Associate Deans Toby A. Hale (’65, P ’03) and Paul N. Orser (’69, P ’01) touched the lives of countless students, families, faculty members and staff. They worked tirelessly to assist wherever needed and whenever their skills matched the situation.

Dean Toby Hale provided wisdom and guidance in many capacities including Dean of the Summer Sessions, Chair of the Honor and Ethics Council, Secretary of the Committee on Academic Affairs, Coordinator of the Wake Forest Research Fellowship Program, and Chair of the Health Professions Committee.

In recognition of their strong, personal friendship and dedication to Wake Forest, the Office of the Dean of the College, and its student and faculty constituents, the College has honored these remarkable men by establishing the “Toby A. Hale and Paul N. Orser Student-Faculty Engagement Fund.”

This fund will be distributed at the discretion of the Dean of the College to support student-faculty engagement. In keeping with Dean Hale’s and Dean Orser’s interests and commitments, priority will be given to using these funds to encourage first-generation students and/or students with financial need to collaborate with faculty members in summer research and scholarly inquiry; mentored, academic activities and courses, including WAKE Washington; and internships with rigorous academic components and faculty oversight.