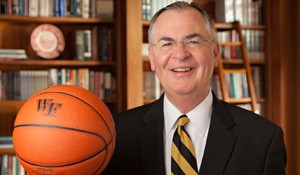 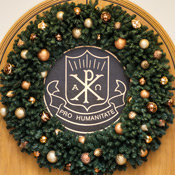 The following message is from President Nathan Hatch:

I am pleased to invite you and your family to the 2013 Reynolda Campus Holiday Party for faculty and staff on Tuesday, Dec. 10, from 3-6 p.m. This year’s event will be held at The Barn and promises to be a wonderful opportunity to enjoy the spirit of the holiday season in the company of fellow Wake Foresters. With holiday arts and crafts stations, festive food, and a visit by Santa Claus, the gathering will be particularly fun for young children.

This year, we will also be adding a bit of Pro Humanitate to the event by collecting nonperishable food goods for Second Harvest Food Bank. Collection boxes will be stationed near the Barn entrance to accept your nonperishable canned or boxed food donations.

The Barn is located near Palmer and Piccolo Residence Halls and WFDD. Shuttle service will be provided on a continuously circulating route. Look for special Holiday Party Shuttle Stop signs in the Benson University Center traffic circle, by the entrance to Wingate Hall in Lot P, and by the Wake Forest Road entrance to Lot W1.

Questions: Please contact Jim O’Connell in the Office of the President at ext. 4061 or oconnejm@nullwfu.edu.

As members of the Commencement Speaker Advisory Committee, we look forward to engaging our graduating students and other members of the university community in the selection process of our 2014 Commencement speaker. As we begin this exciting task, we look to you to provide us with speaker nominations for Commencement 2014.

Please submit your suggestions to CSAC@nullwfu.edu by 5 p.m. on Wednesday, Sept. 25.  Submissions must include:

We are especially interested in hearing from graduating students. Suggestions are also gratefully welcomed from faculty and staff.

As you can imagine, persons of this caliber are in high demand. While we hope to host a speaker from suggestions we receive, we cannot guarantee that our invitations will be accepted.  Your thoughts will be vital to informing our approach and to selecting a speaker.

This committee is dedicated to the transparency of this process, but please understand that the actual invitation process must remain confidential. Announcement of the Class of 2014’s commencement speaker will follow a similar timeline as in years past.

We look forward to reviewing your nominations.

See a list of employees joining and leaving the University in July 2013: END_OF_DOCUMENT_TOKEN_TO_BE_REPLACED Read more