The Office of Wellbeing, recently, presented its Thrive Dimension Champions Awards to faculty and staff.

Annually, the Office of Wellbeing recognizes award winners who demonstrate their commitment to individual and community wellbeing across the eight dimensions of wellbeing:  emotional, environmental, financial, intellectual, occupational, physical, social and spiritual.

Recipients and their dimensions for which they were recognized are the following: 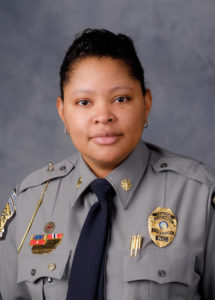 Maj. Derri Stormer of the Wake Forest University Police Department was presented with an award Oct. 8 at the annual conference of the International Association of Chiefs of Police (IACP) in Orlando.

Stormer was named one of the recipients of the association’s 40 Under 40 Award.  It recognizes  law enforcement officers who demonstrate leadership and a deep commitment to the profession.

She and other award recipients will be featured on the IACP’s website and in the November issue of Police Chief Magazine.

Stormer joined the University Police Department as a major in 2016.

See a list of employees joining and leaving the University in January 2016: END_OF_DOCUMENT_TOKEN_TO_BE_REPLACED Read more

Two new members of the University Police Department leadership team, Major Derri Stormer and Capt. Joe Dixon, will be introduced at “Coffee with a Cop” Feb. 4 from 2:30 p.m. to 4 p.m. in Reynolda Hall’s Green Room.

Both joined the department in January.

The event is hosted by Student Government, the Police Advisory Board and the Division of Campus Life.

The University Police Department in February will begin offering to the campus community the Citizen Police Academy Lunch & Learn series.  The department has designed the 10-part series to offer students, faculty and staff a close-up view of the department and its officers.

Registration is available through the Professional Development Center.

Each session will be held in Reynolda Hall’s Heritage Room from 12 noon to 1 p.m.  The series begins on Wednesday, Feb. 10, and will be held on a succession of Wednesdays (except for the week of Spring Break).

Several different members of the police department will participate and make presentations during the series, including Chief Regina Lawson and two new senior leaders in the department–Major Derri Stormer and Capt. Joe Dixon.

“The overall goal of the academy is to improve police and community interaction,” according to Sgt. Lesia Finney, the series’ coordinator. “Graduates will be able to share knowledge gained with others in the community, thereby helping others become more familiar with University Police.”

Those who attend six of the 10 sessions will receive a graduation certificate.

While snacks will be served, attendees are encouraged to bring their own lunch.