From awards to publications to presentations, the Department of Communication has written a roundup of faculty news to share:

The following faculty had writings published in December 2012:

Johnston, Lucas. (Religion). Religion and Sustainability: Social Movements and the Politics of the Environment. Equinox. December 2012. 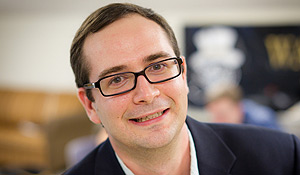 Jarrod Atchison presented the papers “Open Source Evidence: An Analysis of the First Year”; “Spectrum of Interrogation: Developing a New Vocabulary for Affirmative Cases in Intercollegiate Policy Debate”; and “The Role of Evidence Production, Consumption and Communication in an Era of Digital Information.” Jarrod participated in the panel “Creating Community in Forensics: Roundtable Discussion with DOFs” and the Cross Examination Debate Association business meeting at the National Communication Association Conference in Orlando, Florida.

Candyce Leonard published a review of the book “El teatro de los hermanos Álvarez Quintero” [The Theatre of the Alvarez Quintero Brothers] for the theatre journal Estreno 38.2 (2012): 128-130. She also organized and chaired a session titled “The Discourse of Time and Space in Contemporary Spanish Theatre” at the Mountain Interstate Foreign Language Conference, Oct 18-20. She also presented the paper “Federico Garcia Lorca and Artistic Freedom: La casa de Bernarda Alba” in a session title “Spanish Theatre at the Global Crossroads” at the same conference.

Michael Hyde participated in the panel “Confronting the Hermeneutic Imaginary: Author Meets Critics”at the National Communication Association Conference in Orlando, Florida. He also published the book ‘Openings: Acknowledging Essential Moments in Human Communication’ (Baylor University Press, 2012). “Openings engages philosophy, science, the arts, theology, and popular culture, all to demonstrate the profound importance of the possibility of openness to the human experience. In every situation, Hyde contends, this posture of conscious openness to the individuals, events, and places that surround us has noticeable effects on the way we — and others — experience the reality of existence.”

The following faculty had writings published in September 2012: