21 faculty members to serve as fellows in residence halls

The faculty fellows program increases faculty-student engagement by promoting informal, regular interactions between students and faculty in the residence halls for first-year students. The program fosters exceptional faculty-student engagement and helps to educate the whole person through enriching the intellectual, cultural, and social lives of the first-year students. 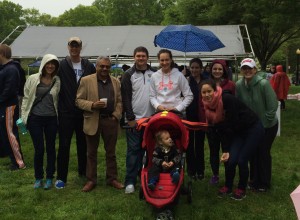 This is a guest post from the Department of Communication:

Department of Communication faculty are helping add tomorrows for the thousands of Americans living with cystic fibrosis by joining the department team to walk in the Great Strides Walk on campus Saturday, April 23, at 10 a.m. on Davis Field.

Last year, the team raised $2,500. Department Chairman Allan Louden with his dog, Glacier, as well as Ron Von Burg, Alessandra Von Burg, Ananda Mitra, and other faculty and students will participate in the walk.

The faculty and students are involved to support graduate student Michael White, according to Alessandra Von Burg.

“We are walking for Michael to give even more tomorrows for the moms, dads, sisters, brothers, daughters, sons, friends and co-workers who struggle every day just to breathe,” said Alessandra Von Burg. “Michael is a CF parent who is committed to showing his son that all lives matter and that there are countless people willing to support him and the thousands of others living with cystic fibrosis.”

1. Register to walk with the team at http://fightcf.cff.org/goto/WakeCommunication.

To learn more about CF and the CF Foundation, visit www.cff.org.

“This is a great opportunity for us to show support and solidarity with our campus and the broader Winston-Salem community. Please join us in our efforts to fight this devastating genetic disease!”

Congratulations to Steve Messier, professor of health and exercise science, whose proposal entitled “Pain Management in Osteoarthritis: Clinical Benefits and Cost Effectiveness” has been funded by the National Institutes of Health (NIH) and by [subaward/subcontract from] Brigham and Women’s Hospital (WFU funding agency).

Congratulations to Ananda Mitra, professor of communication, whose proposal entitled “Hospice needs Assessment” has been funded by the Hospice of the Piedmont.

Congratulations to Timo Thonhauser, associate professor of physics, whose proposal entitled “Kinetics and Reactivity in Metal Organic Framework Materials” has been funded by the U.S. Department of Energy and by [subaward/subcontract from] University of Texas-Dallas (WFU funding agency).