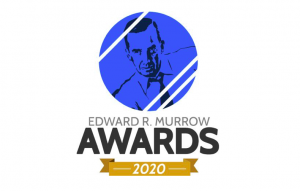 Five Wake Forest journalism students joined the effort through an independent study led by adjunct instructor Mandy Locke. The students built a database that allowed WFDD reporters to quantify the role that the Housing Authority of Winston-Salem played in evictions. The students visited eviction court and helped interview tenants on the verge of losing their homes.

“We are dedicated to covering the important stories and hearing the voices of the people who live here and delving into deep investigations. We are equally committed to stories that spark laughter, curiosity and delight,” said News Director Emily McCord. “We are deeply grateful for the honor and for our listeners who made it possible.”

The Radio Television Digital News Association has been recognizing outstanding achievements in electronic journalism with the Edward R. Murrow Awards since 1971. Award recipients demonstrate the spirit of excellence that Murrow set as a standard for the profession of broadcast and digital journalism. WFDD competes in a region that includes large market radio stations in North Carolina, South Carolina, West Virginia, Tennessee, and Kentucky. Regional winners automatically advance to the national Edward R. Murrow Awards competition.