Locklair’s ‘Autumn Impromptu’ to be performed at Wake Forest

Dan Locklair’s Autumn Impromptu will be performed by guitarist John Kossler (’11) on Thursday, Sept. 25 at 7:30 p.m. in Brendle Recital Hall.

The event is free and open to the public.

The performance is part of a series of events honoring Chilean poet, diplomat and politician Pablo Neruda. Wake Forest is the first of eight organizations worldwide hosting events from 2014 through 2016 as part of Seis Miradas por latinoamerica (Six Perspectives on Latin America) — an international multidisciplinary program organized to promote the richness of Latin-American culture through the arts and literature. Other participants include the Inter-American Development Bank, the San Francisco Conservatory of Music and the Youth Orchestra of the Americas.

“Autumn Impromptu for guitar was composed in the autumn of 2011 and is dedicated to my Wake Forest University colleague, Patricia Dixon,” says Locklair. Four pitches, E/G/F-sharp/D, form the melodic basis of the piece. The order of these melody notes recycles throughout the composition, with each of the piece’s four sections beginning its melody with a different note of the four pitches. In addition to terraced dynamics being an integral part of the piece, the reverberant nature of the guitar’s open strings is also explored throughout this short, one-movement composition.” 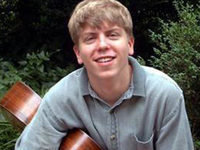 Kossler started his guitar studies through the Suzuki Method with his father, William Kossler, at the age of four. He eventually attended the North Carolina School of the Arts in Winston-Salem, studying under Joseph Pecoraro. Placing in competitions such as the ECU Guitar Festival in Greenville, North Carolina, the Young Arts Festival in Miami, Florida, and the Music Academy in Greensboro, North Carolina, John then attended Wake Forest University, studying under Patricia Dixon. During his education at WFU, he performed in European cities, including Milan, Italy and Postojna, Slovenia. Kossler currently attends the Yale School of Music, pursuing a master’s degree in guitar performance with Ben Verdery.