Weinstein: A professor of many worlds 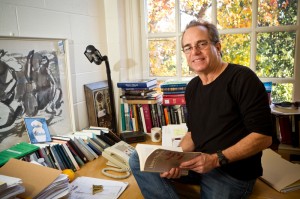 David Weinstein admits to being a bit schizophrenic. Weinstein, a professor of political science and one of Wake Forest’s most prolific scholars in the humanities, often inhabits two intellectual worlds. As he moves back and forth between those worlds, he’s extending Wake Forest’s academic reach to Israel, Germany, Italy and England.

One world is centered around British moral and political philosophy. The other world centers around modern German intellectual history and political thought. “I go back and forth on a daily basis,” he says. “The two areas really cross-fertilize each other… sometimes.”

The student of British philosophy in him has recently published “John Stuart Mill and the Art of Life” (Oxford University Press), a collection of original essays by leading scholars on Mill, probably the most influential English-speaking philosopher of the 19th century.

The book — co-edited by Ben Eggleston, associate professor of philosophy at the University of Kansas, and Dale E. Miller, associate professor of philosophy at Old Dominion University — examines an important feature in Mill’s thought that has been largely neglected by scholars. And, he has yet another book in the works on Mill, “Mill and Sidgwick,” which he hopes to publish as a third volume completing his previous two volumes on 19th and early 20th century English liberalism with Cambridge University Press.

The German intellectual historian in him is working on another book, “Exile and Interpretation,” with a historian at The Hebrew University of Jerusalem. That’s also the topic of one of his classes this semester. “Every semester I try to make one course turn on my scholarship,” he said. “I’ve taught the course twice here and twice in Germany, but it changes every year as my scholarship on the topic evolves and deepens.”

Weinstein, who joined the faculty in 1989 after earning his PhD. in political science from Johns Hopkins University, said Wake Forest has supported his research interests. “There has been a steady growth in scholarship here and in the scholarly profile of the faculty,” he said. “Wake Forest has great potential to be a center of scholarship and research.”

Weinstein has won a number of external fellowships. Last year, he was a Fulbright Fellow at the Simon Dubnow-Institut at the University of Leipzig (Germany), and he has been a visiting scholar at The Hebrew University of Jerusalem; Mansfield College, Oxford University; the Oxford Centre for Hebrew and Jewish Studies at Oxford; and the Murphy Institute at Tulane University.

One of those connections led to an exchange program — started in 1997 by Weinstein and former Dean of the College Paul Escott — between Wake Forest and The Hebrew University. Weinstein has a long relationship with The Hebrew University, dating back to his postdoctoral fellowship 20 years ago. He has returned there as a visiting professor twice.

Another connection, with the Simon Dubnow-Institut, University of Leipzig, is also paying dividends. Weinstein led a recent effort to have Wake Forest join the North Carolina Intellectual History and Jewish Studies Seminars with Duke University and UNC-Chapel Hill. As part of that program, Dan Diner, director of the Simon Dubnow-Institut, will spend three weeks on campus next spring.

Weinstein is also the book editor of the journal Utilitas (Cambridge University Press), the leading academic forum for utilitarian studies. He’ll be in Pisa, Italy, next spring for the International Society for Utilitarian Studies annual conference, which Wake Forest hosted in 2000.