Being Here: Salaam series of events underway on campus 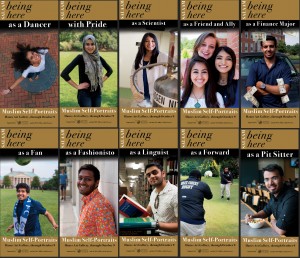 A series of events known as “Being Here: Salaam” is underway at Wake Forest in September and early October.

The “Being Here: Salaam” project began Sept.  21 at Hanes Art Mezzanine Gallery in Scales Fine Arts Center with an exhibit of photographs by Todd Drake featuring Imam Khalid Griggs, associate chaplain, and other Muslims–many from North Carolina.  The exhibit, which draws from Drake’s “Muslim Self-Portrait” series, will continue until Oct. 9.  In that exhibit, Griggs is the only member of the Wake Forest campus community featured.

This week, portraits of 12 Wake Forest Muslim students by Drake have been hung across campus on large banners in highly visible locations, such as the atrium at Z. Smith Reynolds Library.  On each banner, a student self-identifies in a particular manner.  For example, one banner reads “being here as a linguist,” while another reads, “being here as a scientist.”