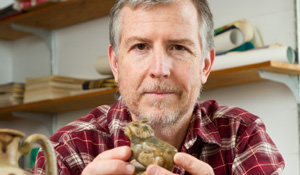 Stephen L. Whittington, director of Wake Forest’s Museum of Anthropology, has accepted a position as executive director of the National Mining Hall of Fame and Museum in Leadville, Colo.

Congratulations to Stephen Bruce King, professor of chemistry, whose proposal entitled “New Reagents for Tracking Protein Oxidation in Cells by MS and Imaging Methods” has been funded by the National Institutes of Health (NIH) under award number 1R33CA177461-01 and the WFU Health Sciences (WFU funding agency).

Congratulations to Daniel Kim-Shapiro, professor of physics, whose proposal entitled “Storage lesion in banked blood due to disruption of nitric oxide homeostasis” has been funded by the National Institutes of Health (NIH) under award number 2R01HL098032-05 and the University of Pittsburgh (WFU funding agency).

Congratulations to Stephen Whittington, anthropology director, whose proposal entitled “Creating: Quilts and Crafts of the Lakota, exhibits and speakers” has been funded by the NC Arts Council.

Whittington has active role at conference

Stephen Whittington, the director of the Museum of Anthropology, participated in a panel discussion entitled “Under the Umbrella: Museums Governed by Larger Organizations” at the annual meeting of the Southeastern Museums Conference in Savannah, Ga., on Oct. 8. Whittington, who is the regional representative for the Southeast on the board of the Association of Academic Museums and Galleries, also hosted a reception for AAMG members and organized a meeting of AAMG state representatives. 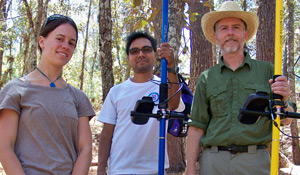 What can pieces of pottery and a GPS-generated map tell us about a past civilization? Since 2000, Steve Whittington, adjunct associate professor of anthropology and director of the Museum of Anthropology, has been helping to uncover the mysteries of the Mixtec people through archeological survey and excavations in Southwestern Mexico’s state of Oaxaca. This spring, Whittington, along with Wake Forest graduate Kate Yeske (‘07) and Mexican colleagues, used powerful GPS equipment to map structures of an ancient Mixtec city, partially hidden beneath layers of dirt and pine needles on top of Cerro Amole, a heavily forested mountain.

The core of the project is to record archaeological remains within the area of the Mapa de Teozacoalco, an early Colonial map of the mountainous region made in 1577. Cerro Amole appears on the map with a two-tiered building and red cross on top of it.

“Archaeologists working in Oaxaca generally believe the Mixtec people lived on mountaintops with monumental architecture during the Classic period of 300 to 900 AD,” said Whittington, “but by getting a better look at the structures and analyzing artifacts like pottery, we are finding compelling evidence that they lived on top of this mountain for a relatively short span, from about 1085 to 1321, during the Postclassic period.”

Whittington hopes to return to the site next May to finish mapping the mountain and expand his GPS survey to multiple municipalities in the area. 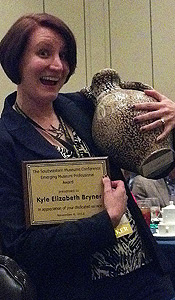 Kyle Elizabeth Bryner, the registrar and collections manager at the Wake Forest University Museum of Anthropology, was one of two recipients of the “Emerging Museum Professionals Award” from the Southeastern Museums Conference.

The Emerging Museum Professionals Award, initiated in 2007, recognizes emerging professionals who have demonstrated excellence and leadership in museum activities at their institutions, within the museum profession as a whole and especially in the southeast region.

The award was presented during the Southeastern Museums Conference 2012 Annual Meeting in Williamsburg, Va., on November 8.