The Center for International Studies (CIS) hosted the first multi-day international student orientation for incoming freshmen, helping students acclimate to life in the U.S. as well as the time change. This year, Wake Forest has 60 new undergraduate students, and 42 of them are from China or of Chinese heritage. One student’s mother attended Wake Forest as an undergrad! Many of them have spent some time in the U.S. either by way of vacations or boarding school, but very few of them had visited Winston-Salem.

The students who sign up for the Friendship Family program have a desire to experience the U.S. at a different level than what only life on campus can provide.

CIS is looking for people interested in incorporating international students into family activities based on both your and the student’s availability and interests. The deadline to submit an application is Thursday, Sept. 12.

The application is here:
http://cis.wfu.edu/iss/friendship/sponsors/ 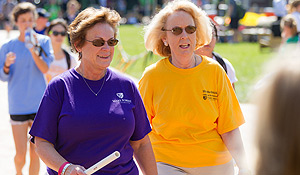 See a list of employees joining and leaving the University in August 2012: END_OF_DOCUMENT_TOKEN_TO_BE_REPLACED Read more