Wake Forest has been selected as one of nine lead consulting institutions (LCIs) for a national initiative on civic learning and democratic engagement by NASPA (Student Affairs Administrators in Higher Eduction), the leading voice for the student affairs profession.

“The CLDE Initiative served as a catalyst for more intentional conversations about civic learning and democratic engagement,” Magjuka said. “I am excited to continue with this work at Wake, and to offer advice and feedback to other campuses as they work to increase civic engagement opportunities for their students.”

LCIs will act as mentors and resources for other lead institutions, and they will be called upon for their expertise and will serve as leaders in helping NASPA staff create and execute strategy, programming, and content for the initiative. For their work, Wake Foresters will receive tailored professional development experiences, publication and writing opportunities, and the chance to influence the ways in which student affairs contributes to the civic learning and democratic engagement field.

To learn more about NASPA’s Lead Initiative and view a complete listing of participating institutions, visit the NASPA website at: http://www.naspa.org/clde/lead_initiative.cfm 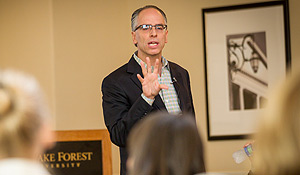 The Institute for Public Engagement and Wake the Vote are hosting “Showdown 2012: One Month Away,” a discussion on Pro Humanitate and active citizenship led by Provost Rogan Kersh.

The event will be held in Kulynych Auditorium in the Byrum Welcome Center on Tuesday, Oct. 2, at 5:30 p.m.

As we head into the last month of the 2012 Presidential Election, there is increased interest by both political parties in engaging young voters. Young people between the ages of 18 and 29 represent 21 percent of all eligible voters in the United States.

Information on how to register and vote in the upcoming November elections will be available. Red, white and blue cookies will be served. Please attend and encourage students to attend this important event. 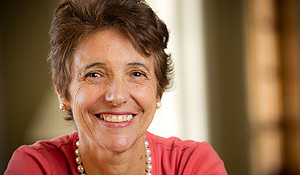 “Fellows and Friends,” a new lunch series for faculty hosted by the Institute for Public Engagement is the brainchild of associate director Norma May Isakow. The second in the series, “Engaged Teaching in a Global Context,” took place Tuesday, Feb. 28, from 11 a.m.-noon in Reynolda Hall, Room 301.

“Every engaged teaching course is about illuminating the human condition,” says Isakow. “If you, as a teacher, can create a course that grows out of a connection you have seen between a community need and your own discipline then you are making students part of the world in both a macro and a micro sense.”

“Civically engaged learning can be life changing learning,” says Isakow. “I know this first hand. That’s why I want students to have these kinds of experiences.” END_OF_DOCUMENT_TOKEN_TO_BE_REPLACED Read more