Comings and goings for January 2017

See a list of employees joining and leaving the University in January 2017: 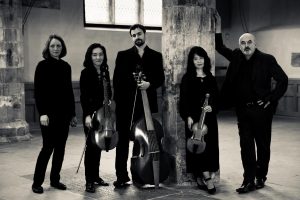 Wake Forest University will host Fretwork on Thursday, Oct. 13. at 7:30 p.m. in Brendle Recital Hall. The performance launches the 2016-17 season of the Secrest Artists Series.

Celebrating their 30th anniversary, Fretwork is the world’s leading viol consort—a historically-informed chamber ensemble who plays the music of early modern England on Renaissance instruments that are the forerunners to modern-day stringed instruments. Their recordings have won both the Grand Prix du Disque and a Gramophone Award, and they have been featured on the soundtracks of two films by the American director Jim Jarmusch. The concert program will feature works by Byrd, Gibbon, Purcell, Taverner and Tye.

A pre-concert talk, led by Stewart Carter, chair of the Department of Music at Wake Forest University, past-president of the Society for Seventeenth-Century Music and also of the American Musical Instrument Society, will begin at 6:40 p.m.

A list of Secrest Artists Series performances for 2016-17 is available here.

This message was emailed to students, faculty and staff May 9 by Communications and External Relations:

We are saddened to announce that Richard Heard, professor of music, died May 8 in Winston-Salem after a long illness.

Dr. Heard joined Wake Forest’s faculty in 1996.  He was an accomplished concert singer who had performed many years across the country and in Europe.  In his extensive career, he had received numerous awards.

We grieve Dr. Heard’s death and extend our condolences to his family and friends, as well as those at Wake Forest who had the opportunity to know him.

Information about a service for Dr. Heard will be announced to faculty, staff and students once his family has made arrangements.  A campus memorial service is expected to be held next fall semester.