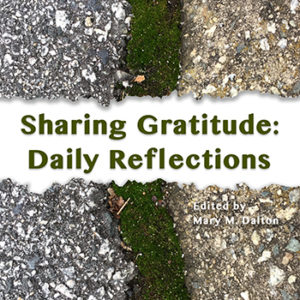 Several years ago, Professor of Communication Mary Dalton (’83) got an idea. Wouldn’t it be great to have a book of daily reflections on gratitude by different authors with diverse perspectives and reflecting different themes and emotional tones? The type of book you could pick up upon waking or before going to sleep to get a little inspiration?

She was busy with other projects and pushed the idea aside. But it just wouldn’t go away. She sent out a bunch of emails two-and-a-half years ago asking people to share their best story about gratitude in a few hundred words, and while the response was enthusiastic among initial contributors from the Wake Forest community, she was nowhere close to getting 366 stories.

Still, she kept going. “People had trusted me with their stories. In some cases, these were the most personal, painful, or defining stories of their lives, and I had to find a way to share them,” says Dalton. “I cast a wider net and looked beyond my colleagues and students–past and present–to my other friends, family members, professional colleagues outside of Wake Forest, classmates, and even some friends of friends to collect additional stories.”

The project was more difficult and time-consuming than Dalton imagined it would be, but her desire to share gratitude and her faith in Bill Kane and Library Partners Press (the publisher for her Critical Media Studies series of student essays on films and television series) kept her from calling it quits. She knew that if she could collect and edit all of the stories, Bill Kane would work his magic on the publishing end of things.

What is Dalton’s takeaway from the project? She sums it up in the introduction to the book, “We create the world around us with our thoughts and interactions. I believe our fundamental purpose here is to take care of one another. Pause for just a moment and think about how the world would look and feel if everyone, or at least more of us, approached daily life from this perspective – taking care of ourselves, others and the planet that sustains us – and if we did so with limitless gratitude.”

How can we make the world a better and more hospitable place? Maybe it starts with sharing stories that model a different way forward. Sharing Gratitude: Daily Reflections is available at Amazon for purchase in print and Kindle editions. The Kindle edition is free for members of Kindle Unlimited.

The Provost’s Office awarded the following grants for fall 2015:

Elizabeth Clendinning and Brandon Robinson, Perspectives on Integration: Music at Little Rock Central High and Beyond, $2,000