Concert to benefit The Shalom Project 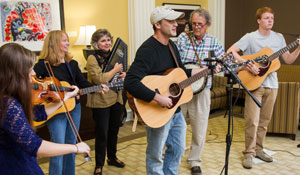 All proceeds go to support the work of The Shalom Project. 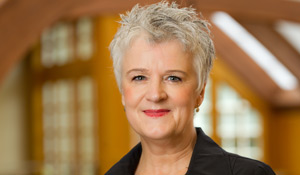 Linda Bridges, an associate dean of admissions who is responsible for international recruitment, is participating in the fourth annual EducationUSA Forum in Washington, D.C., from June 26-28.

Sponsored by the U.S. Department of State’s Bureau of Educational and Cultural Affairs, the EducationUSA Forum brings together 500 college and university recruitment and admissions professionals with almost 60 EducationUSA regional educational experts and advisers from around the world to discuss strategies for helping international students to study in the United States and U.S. students to study abroad.

Colleges and universities, including Wake Forest, play an important role in strengthening ties between the United States and countries around the world. By welcoming international students and encouraging U.S. students to study abroad, we enhance the competitiveness of the U.S. educational system. Not only do higher education institutions connect future global leaders with the American people, foreign students also have a positive economic impact on the United States. As the premiere study destination for international students, the education sector represents the fifth largest U.S. services export and added nearly $23 billion to the U.S. economy in 2011-12. 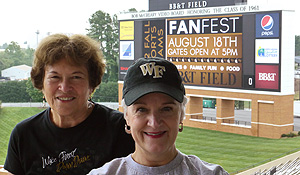 Mary Lou McCormick and Linda McKinnish Bridges, both of the admissions office

Though football season doesn’t officially kick off until Sept. 1, some of the most loyal Demon Deacon fans got off the sidelines last weekend to support the team and a good cause.

During the clinic, the Wake Forest coaching staff instructed the women in all aspects of the game.

After a pep talk by coach Jim Grobe and a fashion show featuring the latest Deacon Shop apparel, participants took to the field to learn how to tackle, run the offensive line, practice passing and receiving and even scrimmage. 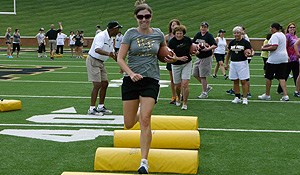 The coaches also gave women an inside look into play-calling strategy, play formations, referee signals and how the team prepares for the intense environment of college football on a weekly basis.

“I have a whole new respect for the players and the game. It’s one thing to watch it and be an armchair quarterback,” said Angela Glover, director of development. “It’s another thing to get in a stance and hold it for more than five seconds!”

Associate dean of admissions Linda McKinnish Bridges, who attended with colleague Mary Lou McCormick, said she is used to giving personal attention when it comes to prospective students, but receiving it at the football clinic was definitely a highlight. 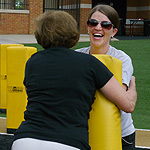 “The thrill of being on the field and passing a football at the 20-yard line isn’t something you get to experience every day. But I have to say, being coached by Sam Swank was the best part of the morning,” she said.

Proceeds from the event benefitted the Coach’s Kids Program, which provides underprivileged and at-risk children in the Piedmont Triad area with tickets to local sporting events.

For more information, check out the news coverage of the event: News 14, WXII, WFMY and Fox 8. 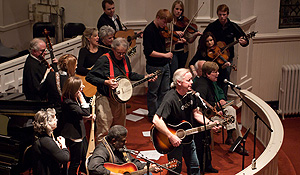 “The Unbroken Circle,” a bluegrass band that incubated in the living rooms of Wake Forest faculty and staff, played a concert recently that raised $5,000 for the Shalom Project, a nonprofit that offers vital programs to its West Salem neighborhood.

The multigenerational band, whose members all have ties to Wake Forest, teamed up on Jan. 29 at the Green Street Church with professional blues musician Big Ron Hunter to perform a benefit entitled “Come Home.” Provost Emeritus Ed Wilson also read from the poetry of W. B. Yeats to an audience that exceeded 250.

“Wake Forest students, faculty and staff have a long history with both Green Street Church and the Shalom Project, be it serving the homeless through the Wake Saturdays program, tutoring children in the after school program, or serving meals at Wednesday night dinners,” said Martha Allman, dean of admissions and one of the Unbroken Circle’s founding members.

It takes a village to put on 'The Grapes of Wrath' 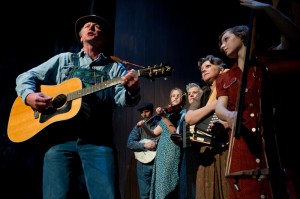 The play has the usual large cast of undergraduates, but Andrews has sought to make it more of a community play, reaching out to faculty and staff and graduate students, and she is using the play as a springboard to partner with other academic departments on campus and a local high school.

“We want the theatre to ripple out to the campus community and to the larger community and integrate the community into what we are doing,” Andrews said. 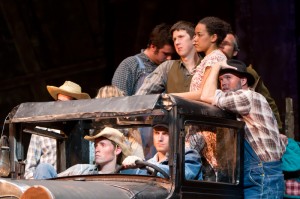 The play, adapted by Frank Galati, is based on John Steinbeck’s classic 1939 novel of a desperately poor family fleeing the “Dust Bowl” of Oklahoma during the Great Depression for what they hoped would be a better life in California. In addition to about 30 undergraduates, the play’s cast also includes several graduate students and others with connections to Wake Forest. Owen Rask, the son of Provost Jill Tiefenthaler and Professor of Economics Kevin Rask, auditioned for and landed the part of Winfield, the youngest son of the Joad family. 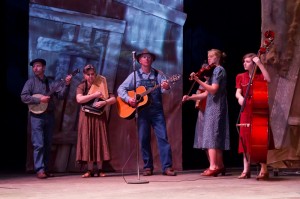 The play features an old-time string bandcomposed of faculty and staff and others associated with Wake Forest: Martha Allman (’82, MBA ’92) (autoharp), director of undergraduate admissions, and her daughter, Ella (bass fiddle); Linda Bridges (accordion), director of admissions for the divinity school; Rick Davidson (banjo), husband of Joanne Davidson, who works in the Schools of Business; Cecilia Kucera (fiddle), a sophomore Presidential Scholar; and Bill McIlwain (MAEd ’94) (guitar). McIlwain also plays “the man with the guitar” in the play.

The production is presenting several opportunities for related events over the next week to explore the play’s themes. “More and more, we are striving to provide opportunities for theatre students to have a larger conversation about the issues that plays bring up,” Andrews said. “We are looking for shows that serve our students — first of all, the University theatre is the ‘lab’ for theatre students — but that can also be integrated with other departments on campus.” 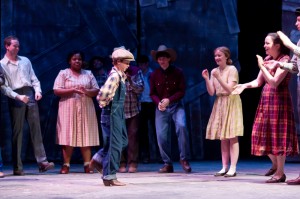 Frank Galati, the playwright who adapted “The Grapes of Wrath” in 1988, will discuss the economic, social and political issues raised in the story with several Wake Forest professors on Feb. 24 at 4:30 p.m. in the Mainstage Theatre. The panel will also include Worrell Professor of Political Science David Coates; Professor of Economics Robert Whaples; and cultural historian and journalist Brian Berger, who will take about the social context of the play. The panel discussion is sponsored by Wake Forest’s BB&T Center for the Study of Capitalism.

Andrews is also taking the play’s themes of poverty, homelessness and the Great Depression to two history classes at Parkland High School, and the students are coming to campus to see the play. Wake Forest has a partnership with the IB program at Parkland.

Also, McIlwain is presenting a one-man musical, “Woody Guthrie, Tonight!,” in the Mainstage Theatre on Feb. 22 at 7:30 p.m. The show will follow Guthrie’s life from Oklahoma to California to New York and feature 16 of his most memorable songs, including, “This Land Is Your Land,” and “So Long, It’s Been Good To Know You.”

“We want the community to know that Wake Forest University Theatre is your theatre and that we belong to the community,” Andrews said.