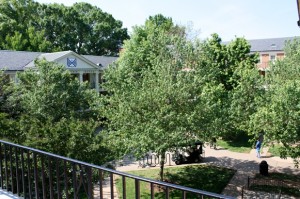 During the week of May 11, trees will be removed from the Kitchin Hall courtyard as part of the renovation project beginning there.

After the renovation of the residence hall, new landscaping will be incorporated as part of the overall design. 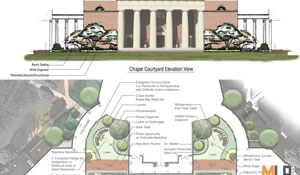 Over the winter break, Facilities and Campus Services began renovation of the courtyards to the east and west sides of the Hearn Plaza entrance to Wait Chapel. Work, which began on Dec. 15 is scheduled for completion on Jan. 16.

Overgrown shrubbery, which was causing damage to the building and obscuring the site, has been removed and will be replaced with a more inviting pocket garden design that opens the spaces up to Hearn Plaza. The project will include curved teak benches, brick pavers, blue stone and an entirely new planting scheme. A larger rendering of the landscaping plan is available on the Office of Sustainability’s website. 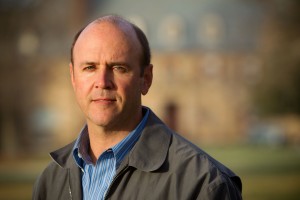 On Feb. 22, Wake Forest volunteers and other members of the community worked together to clean Odd Fellows Cemetery at an event organized by David Davis, manager of landscaping services.

Odd Fellows was created in 1911 and served as the only burial site for black residents for years. Since the 1950s, the cemetery has fallen into disrepair.

Davis organized the service project through the North Carolina Branch of the Professional Grounds Management Society. He was inspired by the story of Deltra Bonner, whose aunt’s gravesite was recently rediscovered.

“I felt led to do something,” Davis said.

James Clyburn, president of the Friends of Odd Fellows Inc., appreciated the volunteers’ efforts. “It’s very exciting to see people to come out and help clean up a cemetery that’s been in disarray for over 30 to 40 years,” he said.

Derrick Boone, associate dean for the Masters of the Arts in Management program at the University, brought his son to the event to teach him the value of service and history. Dedee Johnston, director of the Wake Forest Office of Sustainability, organized students to volunteer at the event. “This is a culturally significant site,” she said. “This is a great opportunity to bring some dignity back to the space.”

Read the full story in the Winston-Salem Journal.

Watch out for moving trees

Watch out for moving trees on campus. On January 27 and 28, the Landscaping Services Department will be relocating several trees from the site of the new business schools building to other locations on campus.

The new business schools building will be constructed at the intersection of Carroll Weathers Drive and Wingate Road, north east of Wait Chapel.  The new building has been designed to protect most of the mature oaks and other species in that location, but a few trees would be lost – if not transplanted. END_OF_DOCUMENT_TOKEN_TO_BE_REPLACED Read more