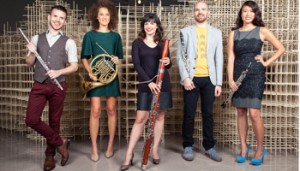 Hailed by the Houston Chronicle as “revolutionary chamber musicians,” WindSync is a fresh and energetic wind quintet internationally recognized for dramatic and engaging interpretations of classical music.  A winner of the 2012 Concert Artists Guild Victor Elmaleh International Competition, this dynamic ensemble focuses on building a connection with audiences through adventurous programming and charismatic stage presence.

Critics and audiences alike rave about programs that expand the wind quintet repertoire with newly commissioned works written for WindSync, as well as, a wide array of original arrangements of classical masterworks. These five virtuoso players perform exclusively from memory and specialize in creative concerts that inspire and entertain audiences of all ages. The concert at at Brendle Recital Hall will feature pieces by Mozart, Stravinsky, Ravel, Berstein and even Radiohead.

Enrich your concert experience by joining our pre-concert talk at 6:40 p.m. The talk will be led by Wake Forest University Music Department Assistant Professor, Kathryn Levy and feature demonstrations by the WFU student wind quintet. 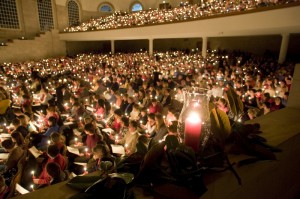 The 46th annual lovefeast — the largest single lovefeast in North America — will be held Sunday, Dec. 5, at 8 p.m. in Wait Chapel. The service is free and open to the public. END_OF_DOCUMENT_TOKEN_TO_BE_REPLACED Read more