We are saddened to share that Bernard Lee “Bern” Beatty, retired associate professor of management in the business school, passed away on August 4. He was 92 years old.

Beatty taught accounting, management and case writing for 42 years, from 1974 to 2016; he was recognized as a Babcock Educator of the Year six times between 1975 and 2003.

For several years of his Wake Forest career, Professor Beatty awarded the prestigious Bern Beatty Scholarship, an annual full-expenses two-year scholarship, to support exceptional business school students; this endowed scholarship continues to be awarded annually in his honor. The Bern Beatty Faculty Fellowship for outstanding business professors was established by alumni to recognize his teaching and mentorship.

The Bern Beatty Colloquium in Farrell Hall, home of the Wake Forest School of Business, was named for him. END_OF_DOCUMENT_TOKEN_TO_BE_REPLACED Read more

Memorial service for Griffin Bennetti to be held Feb. 2

This announcement was emailed to faculty, staff and students on Jan. 24 by Wake Forest Communications and External Relations:

A memorial service for Griffin Bennetti will be held Friday, Feb. 2, at 5 p.m. in Farrell Hall’s Broyhill Auditorium.

A junior, Griffin Bennetti died last June at his home in Moorpark, California. He was a physics major and a history minor. 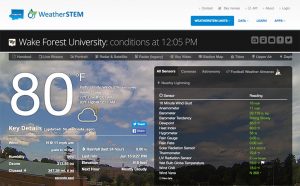 Now is the time of the year when many at Wake Forest are asking, “How hot is it?” Two new weather stations installed on campus will answer that question and many others about the weather around the clock.

The WeatherSTEM stations were installed, recently, on top of the Miller Center and the scoreboard at BB&T Field.  They use a combination of weather instruments and sensors to take environmental measurements and offer frequently updated details on temperature, humidity, the heat index, barometric pressure and much more.

Each station includes a sky camera, with one directed toward Kentner Stadium, Farrell Hall and Wait Chapel, while the other camera is directed across BB&T Field.

While the weather stations are useful for anyone interested in weather at and around the University, they offer valuable information to a number of University departments and groups, including the Wake Forest Police Department and the University’s Crisis Management Team.

Anyone with access to the internet can visit the web sites for the weather stations located at the Miller Center and BB&T Field.  Each web site has a link to the other. The links are labeled “WEATHERSTEM UNITS” and can be found at the top right side of the sites. END_OF_DOCUMENT_TOKEN_TO_BE_REPLACED Read more 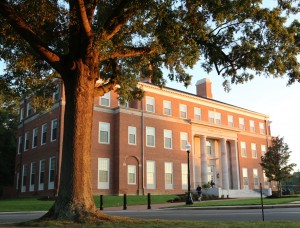 Among the strategies that contributed to Farrell Hall’s Gold-level certification is its inclusion of Forest Stewardship Council (FSC) certified wood paneling and regional materials. Almost 30 percent of the building materials by value were manufactured within 500 miles of the project site. More than 80 percent of on-site generated construction waste from the project was diverted from landfills. The incorporation of bicycle storage facilities also encourages alternative transportation.

One of the most notable features of the building is its open floor plan with classrooms, offices and social spaces on every floor—an intentional design aspect that encourages faculty-student interaction. Before Farrell Hall’s opening in 2013, School of Business faculty, staff, undergraduates and graduates were housed in two separate buildings on the Reynolda campus.

“Farrell Hall was designed to be an innovative space from the ground up. Our aim was to provide a remarkable home for our school, without compromising our commitment to sustainability. Our open, collaborative environment fosters business education and encourages engagement between faculty, staff and students,” said Charles Iacovou, Sisel Distinguished Dean of the School of Business. “Achieving LEED Gold certification places the School of Business in excellent company at Wake Forest.”

Suzanne Reynolds, dean of the School of Law, will be the guest speaker Dec. 9 at the regular meeting of the Staff Advisory Council. She will speak early in the meeting, which will be held from 9:30 a.m. to 11 a.m. in Farrell Hall’s Broyhill Auditorium.

University staff members are invited to the meeting.