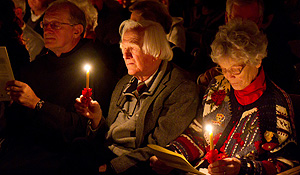 The Lovefeast and candlelight service will be Sunday, Dec. 4, in Wait Chapel. It is sponsored by the University and celebrates one of the unique traditions of the Moravian community in Winston‑Salem. The Quad is lined with luminaries, the Chapel is adorned with Christmas decorations, the concert choir and Moravian band are featured, traditional Moravian coffee and buns are served, and beeswax candles are provided to all who attend.

This year’s speaker will be President Nathan O. Hatch, and the service will feature music from the University Concert, Flute and Handbell Choirs as well as Don Armitage, University Organist.

The Wake Forest Lovefeast consists of a sweetened bun and creamed coffee. It is served to the participants by dieners (German for servers). During the meal, music is offered by the Wake Forest Concert Choir, Handbell Choir, Flute Choir and the Messiah Moravian Church Band. During the service of song and scripture reading, handmade beeswax candles decorated with a red paper frill are distributed to each worshiper. The candles are lit while the worship space is darkened except for a large illuminated Moravian Advent Star for the singing of the final hymns. 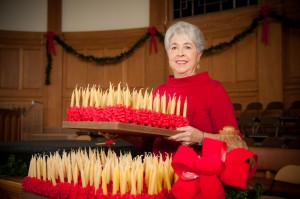 Gayle Hartgrove left the corporate world in 1996 to work for “brother” Ed Christman (’50, JD ’53), longtime University Chaplain (now retired), as administrative assistant in the Chaplain’s Office. Since then she has been the keeper of one of Wake Forest’s most cherished traditions, the annual Christmas Lovefeast and Candlelight Service, scheduled for Dec. 5 this year.