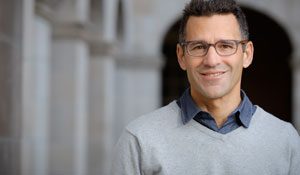 Professor of English Dean J. Franco has been named director of the Wake Forest University Humanities Institute beginning January 2017. The Institute, which was established in 2010, supports humanities scholarship which draws on disciplines like philosophy, literature, religion, history, and other fields to interpret the human experience, understand our world, and engage the issues of our time.

In the past six years, nearly 200 College faculty from 35 departments and programs across the humanities, natural and social sciences, and the arts, and 30 faculty from law, medicine, divinity and business, have collaborated with the Institute — helping bring together top scholars and leaders to produce new scholarship, inspire new directions in teaching, and demonstrate how the humanities can inform and impact important issues of our time, such as:

Franco along with Mary Foskett, Wake Forest Kahle Professor of Religious Studies; Sally Barbour, professor of Romance Languages; and David Phillips, associate professor of Interdisciplinary Humanities — laid the groundwork and secured the funding that made the Institute possible.

The Institute has also supported transformational programming in the College such as the Interdisciplinary Humanities Pathway to Medicine Program, which offers guaranteed admission to Wake Forest School of Medicine for up to five undergraduates majoring in the humanities or fine arts, and new interdisciplinary initiatives like a growing digital humanities community at Wake Forest.

Wake Forest was recently awarded a $650,000 grant from The Andrew W. Mellon Foundation in support of engaged humanities – teaching, learning, mentoring and real-world problem solving that moves beyond the classroom. With support from this grant, the Humanities Institute will offer new programming in narrative medicine and will collaborate with Reynolda House Museum of American Art to host new scholarly conferences.

“I am excited about working with Reynolda House to implement the Mellon Grant funded Reynolda Conferences in 2018 and 2019,” Franco said. “This is a dream scenario — the opportunity to assemble scholars working on the same sets of questions for extended, deep learning.”

Franco joined Wake Forest 2001. He directs the Jewish Studies minor, has recently served as associate chair of the English department, and was the Scott Family Faculty Fellow from 2012-2014. He researches and publishes on race and literature.

The launch celebration will be Wednesday, Nov. 20, from 5-6:30 p.m. in the Green Room of Reynolda Hall. Provost Rogan Kersh and the editors will be in attendance.

The following faculty had writings published in July 2013: