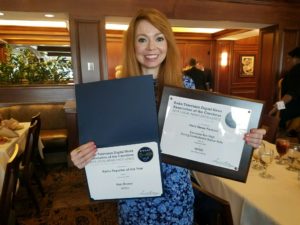 Kerri Brown at the RTDNAC/AP Awards

This is a guest post from radio station WFDD at Wake Forest:

WFDD has been recognized by Radio Television Digital News Association of the Carolinas and the Associated Press for its 2019 awards, recognizing the best in broadcast journalism in North Carolina and South Carolina.

The station received first place in four categories, including in the investigative and hard news categories. WFDD reporter Keri Brown received a 2nd place honor for Radio Reporter of The Year.

“We strive to bring quality journalism to our community day in and day out, so it’s
truly an honor for our work to be showcased among our colleagues in the Carolinas,” says Emily McCord, WFDD News Director.

Winners were announced Saturday, Oct. 26, 2019, at the RTDNAC/AP annual luncheon at Charlotte Motor Speedway with nearly 200 professional and student journalists in attendance. 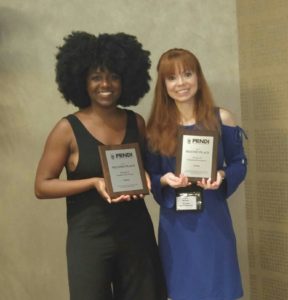 88.5 WFDD, the public radio station licensed to Wake Forest, was recently honored by the Radio Television Digital News Association of the Carolinas (RTDNAC) with nine awards for excellence in journalism.

Elide Vargas, administrative coordinator in Politics and International Affairs, is celebrating her 30 year milestone this month. See the complete list of faculty and staff milestones for November 2014.