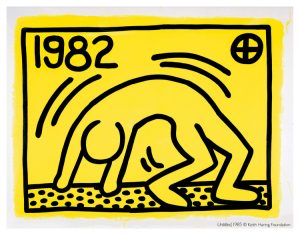 The Southeastern Center for Contemporary Art is hosting “With Open Eyes,” an exhibition featuring nearly 60 works selected from Wake Forest University’s Student Union Collection of Contemporary Art. The exhibition will run through Oct. 2. Admission is free.

Works on display are from among the more than 160 pieces purchased by students during University sponsored student art-buying trips that have taken place every four years since 1963.

The buying program, where students are given the opportunity to make the final decisions about which works of art will be added to the University’s collection, is believed to be the only one of its kind in the country. The goal is for the students to use the available funds to purchase works that reflect the current times. From Picasso’s L’Ecuyere (1960) to Jasper Johns’ Flags (1967-68) to Alex Katz’s Vincent with Open Mouth (1970), to Keith Haring’s Untitled (1982), to Christian Marclay’s Memento (Hearing is Believing) (2008) the collection include paintings, prints, drawings, sculpture, and photography.

Students participating in the trip are selected through a competitive application process. After much study, research and debate, the group hones in on artists whose work they like. They write to galleries asking to see what works are currently on the market by these artists. During the trip, they view the top choices, negotiate with gallery owners and decide as a group which works will become the newest additions to the collection.

“Over the course of their experience, students learn not only about choosing and purchasing contemporary art, they learn about themselves,” says art professor Jay Curley. “When they start the process of preparing for the trip, they are overwhelmed and slightly intimidated by the New York gallery world. By the end, they are on their mobile phones walking through Chelsea bargaining with these same galleries.”

Curley and associate teaching professor Leigh Ann Hallberg will be leading the 2017 trip next spring.

Mark Reece (’49), who was dean of men and College Union adviser, developed the idea for the trip before the University even had an art department. In 1963, Reece, and then faculty members Ed Wilson (’43) and J. Allen Easley and two students drove to New York City, explored the contemporary art galleries there, and came back with a dozen works of art for the University.

Learn more about the Wake Forest University art-buying trip by watching this three-minute excerpt from the exhibition video.

This is a guest post from the Office of the Provost:

The Provost’s Office awarded the following grants for spring 2015:

Provost’s Fund for a Vibrant Campus: