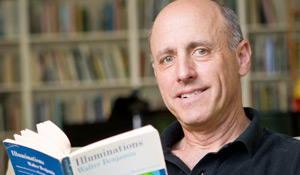 World War I marked the beginning of a period when a soldier could be severely injured in battle and still survive. In his research on art and World War War I, Charlotte C. Weber Professor of Art David Lubin discovered the work of Anna Coleman Ladd, an American sculptor who began creating prosthetic facial masks for disfigured soldiers.

Ladd’s work became the inspiration for “Flags and Faces: The Visual Culture of America’s First World War,” Lubin’s upcoming book. His findings have been featured in recent weeks in the Washington Post and on NPR’s All Things Considered.

On Oct. 27, Lubin will present “Behind the Mask: World War I, Plastic Surgery, and the Modern Beauty Revolution,” the inaugural Lifelong Learning lecture at 7:30 p.m. at the Byrum Center Auditorium. The lecture will address facial disfigurement, and the subsequent transformation in beauty standards for women, as evidenced by movie star photography, the growth of the makeup industry, and the advent of beauty pageants such as Miss America.

This event is free and open to the public.

What sparked your interest in these World War I masks?

About seven years ago, I started writing a book about American art in the First World War. I was interested in all the different ways the visual culture of America was transformed by the First World War. I was looking at everyday life objects and wondering how people’s faces and bodies changed. I was fascinated to find these soldiers with severe facial wounding that history basically forgets about. It’s chilling and sort of heartrending to think what it must have been like for a man to come home and have his children not recognize him or be afraid to look at him. I did all the research I could on this topic to find out who was trying to improve the lives of these returning soldiers. This led me to the story of Anna Coleman Ladd, who came up with the idea of sculpting prosthetic facemasks for men whose faces were beyond the repair of plastic surgery.

Why do you think Ladd’s story has struck a chord with so many people?

I think what Anna Coleman Ladd was doing was very noble. She had a humanitarian impulse to protect the feelings of these men and their families. When the men would go out on the streets before they had their masks, it was said that strangers would pass out seeing the disfigurement of their faces. When they got their masks, they could go out without worry.

However, modern disability rights perspectives could argue that Ladd’s masks were working in the opposite direction. Part of where our consciousness is today with disabilities is that disabled persons shouldn’t be made to feel the need to hide their physical deformity. So in a sense, masking faces also gave the impression that these soldiers look a certain way that society can’t bear to see.

How is this relevant to today’s world?

In my lecture, I will talk about World War I, facial disfigurement, and the subsequent transformation in beauty standards for women, as evidenced by movie star photography, the growth of the makeup industry, and the advent of beauty pageants such as Miss America. I will discuss the cult of physical beauty that arose in reaction to wartime ugliness. Ladd’s work was the beginning of what has become a huge trend in our society. If you ever make your face look a certain way in a social situation, you’re putting on a mask.

Have students been involved in your research?

I am always getting undergrads involved in my research. I’ll usually teach a seminar on my research topic and then the students will spend a semester picking a topic that’s related to my general topic but is something that is of specific interest to them. This semester I’m teaching a World War I-related course. One of my students, who is a business major, is researching advertising in the First World War. Another student is researching women’s magazines and changing views of beauty in this period. It’s great because I can bounce ideas off of them.

How does the story of the masks fit into your other work?

“Flags and Faces” is a small book that’s coming out this February. I have another, larger book called “Grand Illusions” that will come out about a year later. “Grand Illusions” is a bigger, more detailed examination of World War I and how the art and the popular culture were intertwined in a way that convinced Americans to go to war.

What do you hope people will take away from your book, your lecture and your overall research?

For me, through everything I write, I’m trying to understand how we live today by examining in detail how we lived in the past.

I want people to have a better sense of how the visual world that we inhabit alters the way we think about things in terms of identity, in terms of gender and the way we think about the other. Everything is determined by the images that cross our retinas. So, if people become more sophisticated in understanding that their thoughts are affected by the things they see, the hope is that they will become more sophisticated in maybe rejecting some of those things.