Humanities Institute publication: "How We Know, What We Know: The Humanities Responds to Pandemic"

In November 2020, the Wake Forest University Humanities Institute released “How We Know, What We Know: Humanities Responds to Pandemic.” 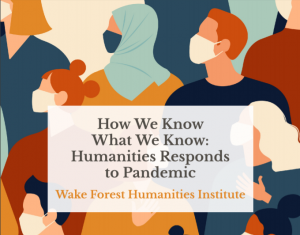 This collection of essays by Wake Forest faculty was commissioned by the Humanities Institute at the end of spring 2020; it includes historical, critical, interpretive and reflective essays from across the humanities, shedding light on the past, present and future of our emergency.

In an announcement, the Humanities Institute said:

The pandemic and resulting travel restrictions disrupted many of our colleagues’ research plans, while quarantine, outrage over racism, and the ever-changing contingencies of work and family life meant that many of us found our intellectual attention for scholarship overwhelmed. Still, our faculty have copious knowledge and a lot to say about the history, art, literature, and lived experience of quarantine, emergency, and diseases, as a result of our scholarly training in the humanities. Seeking to document and publish this base of knowledge, the Humanities Institute put out a grant for short essays which would direct disciplinary knowledge and scholarly training to some aspect of the current emergency. We are thrilled and grateful for what our colleagues produced, and this collection is the result.

You can read the publication online or download it as a PDF by clicking the link here. 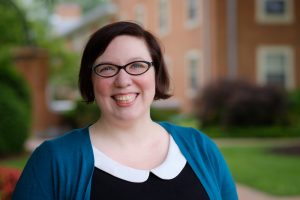 Aimee Mepham has been promoted to assistant director of Wake Forest’s Humanities Institute.

Mepham, who first joined the Wake Forest staff in 2008, was previously the institute’s program coordinator.

As assistant director, Mepham’s new responsibilities will include overseeing the Humanities Institute’s Story, Health and Healing Initiative, which is one of several recipients of the Engaged Humanities grant that the Andrew W. Mellon Foundation awarded Wake Forest in December 2015.

Previously, Mepham has taught creative writing workshops and undergraduate writing courses at Indiana University, Washington University in St. Louis, Wake Forest and Salem College, where she was visiting assistant professor of creative writing and interim director of the Center for Women Writers.

“She is a gifted writer who brings to her work at the Humanities Institute key skills and experience that have helped shape the institute’s current programs and are generating exciting new trajectories for future programming,” said the institute’s announcement.

Mepham earned her bachelor’s degree at Albion College and an MFA in Creative Writing from Washington University in St. Louis. Her work has appeared in a number of publications, including River Styx, Opium Magazine, Pinball Magazine and Meridian. Her work has also been performed by Liars’ League NYC, a live literary journal featuring professionally trained actors reading original short stories by writers.

Having served in a number of roles at Wake Forest, Mepham was the first administrative coordinator for the Humanities Institute and the Institute for Public Engagement. Before that, she was administrative assistant for the psychology department.

See a list of employees joining and leaving the University in July 2013: END_OF_DOCUMENT_TOKEN_TO_BE_REPLACED Read more

See a list of employees joining and leaving the University in August 2012: END_OF_DOCUMENT_TOKEN_TO_BE_REPLACED Read more