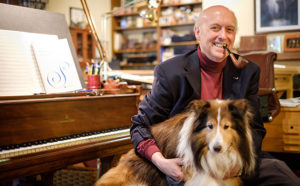 Naxos American Classics has released the world premiere recording of Dan Locklair’s Symphony No. 2 “America,” along with his “Hail the Coming Day,” “Concerto for Organ and Orchestra,” and “PHOENIX” for orchestra. The four pieces all have thematic roots in North Carolina.

Completed in 2016, Symphony No. 2 “America” is organized in three movements, with each movement featuring an American holiday (Independence Day, Memorial Day, Thanksgiving). This major work has been featured multiple times on the popular nationally syndicated radio program, “Performance Today,” and on many NPR classical music stations nationwide.

The symphony “celebrates all that is good about America and that sense seems to be striking a nerve in all who hear it…the feedback that I have already personally received from radio stations and listeners alike has been extremely gratifying,” said Locklair.

The album also features a new orchestral version of “PHOENIX,” a commission from the Winston-Salem Symphony and Arizona MusicFest. This piece has been performed by orchestras across the country, in addition to being a frequent request by President Hearn for WFU convocations.

“Hail The Coming Day” was commissioned by the City of Winston-Salem in 2013 to celebrate the 100th anniversary of the joining of the towns of Winston and Salem. The title comes from a speech made by Robert Gray, an early city leader.

The album closes with Locklair’s 2010 meditation on theology and canine affection, “Concerto for Organ and Orchestra.” This piece was commissioned by the Greater Greensboro Chapter of the American Guild of Organists and was premiered by the renowned Gerard Schwartz. The piece was inspired in part by Locklair’s dog, Riley.

The disk was recorded by the Slovak National Symphony Orchestra.