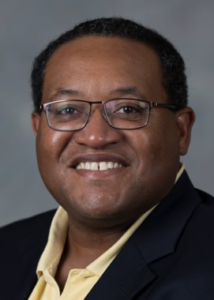 Wake Forest alumnus Eric Ashley (Ashley) Hairston has been named associate dean for academic advising and University associate professor, effective July 1.  At Wake Forest, he will lead the Office of Academic Advising (OAA), within the Office of the Dean of the College.

“Ashley was selected following an extensive internal and external search to find a successor to Christy Buchanan, who has been a powerful advocate for our students and faculty in her seven years of guiding the Office of Academic Advising,” announced Dean of the College Michele Gillespie. “She will step down as senior associate dean of academic advising and return to her position as a professor of psychology this summer.”

A 1992 graduate of the College, Hairston “has shown administrative and academic leadership as well as a passion for advising” at Elon University, Gillespie said. There, he is associate professor of English and of law and humanities.  He also serves as coordinator of Elon’s independent major, a role in which he advises more than 100 students, annually. He also advises majors ranging from biophysics to classical studies. Hairston has spent more than a decade as a prelaw advisor, major advisor and interdisciplinary minor advisor.

Hairston has also been substantially involved in diversity and inclusion efforts at Elon.  As a member of the President’s Diversity Council at Elon, he helped launch Elon’s first strategic plan for an unprecedented commitment to diversity and global engagement.

“Ashley impressed the search committee in multiple ways, including with his vision for raising the profile of advising at Wake Forest while continuing to support faculty, professional advisers, and other partners involved in the advising process,” Gillespie said. “He spoke of his passion for advising as a critical component of an undergraduate education.”

He attended Wake Forest on a Nancy Susan Reynolds Scholarship and graduated with a Bachelor of Arts degree in English and politics. He served two terms on the Board of Visitors for the Wake Forest College and Graduate School, from 2001-08, during which he provided counsel on such aspects as student and faculty academic affairs and academic priorities.