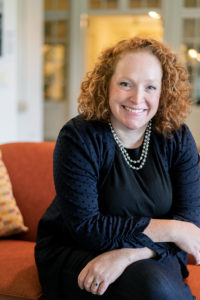 This is a guest post from Reynolda House Museum of American Art:

Reynolda House Museum of American Art has hired Amber Albert as its new manager of community and academic learning. Albert was previously the executive director of the Historical Association of Catawba County and an independent consultant for history museums. She joined the teaching and learning team at Reynolda on Jan. 7.

Reynolda presents scores of programs and events each year that are open to the public, ranging from outdoor films and gallery talks to art workshops and Christmas tours. In her new role, Albert will work closely with colleagues across Reynolda and Wake Forest as well as with community partners across the Piedmont Triad in planning programs that connect to Reynolda’s collections, landscape, and history.

Albert is new to Reynolda but not to Winston-Salem and its deep commitment to the arts and historic preservation. Her husband, Gary Albert, is editorial director and adjunct curator of silver & metals at the Museum of Early Southern Decorative Arts. At Reynolda, Albert says she’s most looking forward to helping new audiences make meaningful memories.

“Much has changed in the century of Reynolda’s existence, but guests today still experience the essence of Katharine Reynolds’s original vision,” Albert says. “That’s what excites me about coming into this role, the ability to make Reynolda’s collections and history relevant to people today.”

Reynolda’s Deputy Director Phil Archer says Albert’s experience in interpretation, place-based programs and fundraising make her an ideal addition to the Reynolda team. In Catawba County, she managed two projects that illuminated the cultures of the region. One exhibit, “Unpacking: How Many Cultures Make Catawba Home” received funding from the United Arts Council of Catawba County, and the National Endowment for the Humanities supported another.

“Amber brings a depth of experience in building relationships with the people who make up the community in which she works,” Archer says. “Developing those relationships with our audience and evolving with the needs and interests of our visitors is a critical priority for us at Reynolda. Amber will play an important role in achieving this.”

The public is invited to meet Albert at two upcoming events. In partnership with Wise Man Brewing’s Healthy, Wealthy & Wise program, Reynolda is hosting informational evenings at the brewery each Tuesday in January from 6 to 8 p.m. At the final evening, Jan. 29, Albert will be available to talk with guests about upcoming programs. On Tuesday, Feb. 5, Reynolda will host the African American Read-In at noon. The event, held in partnership with the annual African American Read-In, is free and open to the public. Albert will join other participants in reading from a favorite book or writing by an African-American author.

Albert has published numerous articles and presented about historic sites, and she serves on a subcommittee of the North Carolina Preservation Consortium. She holds a Ph.D. in public history from Middle Tennessee State University, a master’s degree in American history from the College of Charleston and a bachelor’s degree in public relations from Appalachian State University. She and her husband live in Winston-Salem with their son, Tice.