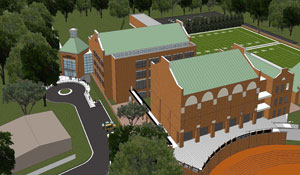 Q: What are the estimated cost and timeline for the facility?
A: Additional fundraising for the sports performance center is underway and will determine the exact scope of the building, as well as the timeline for ground breaking.

Q: What is the latest with the Reynolds Gym renovation?
A: As part of the Wake Will campaign, President Hatch has spoken about the need to make wellbeing a pivotal component of the Wake Forest experience. Part of this commitment will be realized through the renovation of Reynolds Gym. Conversations with students, faculty, Athletics Department staff and donors, as well as architects and space planners, have generated important changes to the initial scope of the project.

Most significantly, the renovated Reynolds Gym will no longer house elements of the Athletics Department and Health and Exercise Science as once planned, allowing more usable space for the health and fitness needs of the total campus population.

The move of the School of Business into Farrell Hall and plans to renovate Worrell Professional Center allow the Health and Exercise Science Department to take advantage of new academic space in Worrell. In addition to significantly upgrading the conditions for Health and Exercise Science faculty and classes, this move continues the University’s investment in the north part of campus, which, in addition to Farrell Hall, included renovations to the student apartments and Spry Soccer Complex, and completion of the new Magnolia and Dogwood residence halls and a new dining facility.

An October 2013 article in the Old Gold and Black referenced ambitions to break ground on Reynolds Gym renovations in 2014. The changing scope of plans requires additional design work, which may postpone construction.

Q: Where is Wake Forest on fundraising for the evolution of Reynolds Gym?
A: Transforming Reynolds Gym, which will include wellbeing center facilities, remains one of the top capital projects of Wake Will: The Campaign for Wake Forest. Wake Forest is pursuing donor support to bring to life a vital physical center and shared space where people can come to learn and practice healthy behaviors.

Q: Why is Wake Forest building a new sports performance center when many of the older buildings and residence halls need renovating and updating?
A:  Over the next five years, the Wake Will campaign will turn several of our ambitions into reality, and identifying projects of donor interest is a key component. We are aggressively pursuing donor support for a major renovation of Scales Fine Arts Center, as well as for Salem, Tribble and Carswell Halls. Finding donors to specifically fund residence hall improvements can be challenging.