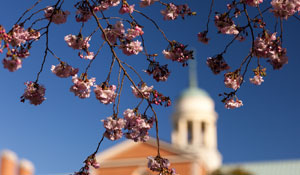 The following is a message from President Nathan Hatch.

Welcome back! I hope you enjoyed a restful break surrounded by friends and loved ones. Last year was a significant year in the life of the University, and 2014 looks to be just as promising. As we begin a new semester, I would like to offer a few important updates to the State of the University address I provided in November.

• After nearly six extraordinary years of service to Wake Forest University, Steve Reinemund has decided to step down as Dean of the School of Business at the end of this academic year. Dean Reinemund has demonstrated genuinely transformational leadership since he came to Wake Forest in 2008. His accomplishments include integrating Wake Forest’s undergraduate and graduate business education, evolving and growing the one-year Masters of Arts in Management program, and, most recently, overseeing the completion of Farrell Hall.

I am pleased that Dean Reinemund has agreed to remain an Executive-in-Residence, a role that will allow him to teach classes, mentor students and bridge connections. We will begin a national search for his replacement immediately. Vice Dean and Professor of Management Charles Iacovou will continue to manage the daily operations of the School of Business.

• I am pleased to announce that Jacque Fetrow has been reappointed to serve a second term as the Dean of Wake Forest College. Dean Fetrow’s exemplary efforts in this position have helped move the vital work of the College forward, and I am grateful for her continued leadership.

• Vice Provost Jennifer Collins was named Judge James Noel Dean of Southern Methodist University’s Dedman School of Law. After 10 years as a critical member of the Wake Forest community, she will begin as Dean at SMU on July 1, 2014. You can read more about Vice Provost Collins’s impact at Wake Forest in Inside WFU.

• Finally, Wake Forest football fans across the country are celebrating the arrival of Dave Clawson as our new football coach. Coach Clawson is a proven winner and leader who has had great success at every institution he has coached. Coach Clawson spent the last five years coaching at Bowling Green State University in Ohio, where he guided the Falcons to the Mid-American Conference championship.

Wake Will: The Campaign for Wake Forest

Last fall, after the successful launch of Wake Will on our campus, we traveled to various cities in North Carolina to announce our plans for the future of Wake Forest. This semester, we will visit key regional cities to inform our alumni, parents and friends about the campaign. We will be hosting events in Charlotte, New York City, Washington D.C., Atlanta and Raleigh. To date, we have raised $343 million toward the $600 million goal for the Reynolda Campus. You can help us maintain momentum by using #WakeWill when celebrating Wake Forest through social media.

Over the next five years, the Wake Will campaign will turn several of our ambitions into reality. We are aggressively pursing donor support for a major renovation of Scales Fine Arts Center, as well as for Salem, Tribble and Carswell Halls.

As part of the Wake Will campaign, I have spoken about the need to make wellbeing a pivotal component of the Wake Forest experience. Part of this commitment will be realized through the renovation of Reynolds Gym. Conversations with students, faculty, Athletics Department staff and donors, as well as architects and space planners have generated important changes to the initial to scope of the project.

Most significantly, the renovated Reynolds Gym will no longer house elements of the Athletics Department and Health and Exercise Science as once planned, allowing more usable space for the health and fitness needs of the total campus population.

To accommodate this change, we will construct a sports performance center for varsity athletes as part of a new facility behind Miller Athletic Center. This new facility will accommodate the year-round training needs of more than 350 student-athletes competing in 16 sports and include space for coaches’ offices and team meeting rooms.

The move of the School of Business into Farrell Hall and plans to renovate Worrell Professional Center allow the Health and Exercise Science Department to take advantage of new academic space in Worrell. In addition to significantly upgrading the conditions for Health and Exercise Science faculty and classes, this move continues the University’s investment in the north part of campus, which, in addition to Farrell Hall, included renovations to the student apartments and Spry Soccer Complex, and completion of our new Magnolia and Dogwood residence halls and a new dining facility.

An October 2013 article in the Old Gold and Black referenced ambitions to break ground on Reynolds Gym renovations in 2014. The changing scope of plans requires additional design work, which may postpone construction.

This is an exciting time in the life of our community. As we enter a new semester and begin a new year, I hope you will take every opportunity to work diligently, make meaningful connections and explore how you can best use your talents and abilities to lead lives that matter.