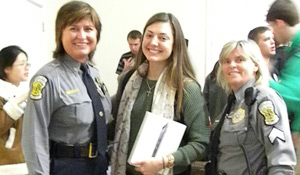 The police department had several objectives: first, to increase transparency; second, to increase awareness of its services; and third, to be able to leverage community relationships and public support. Each month, the department has a different theme across its social media channels, including topics such as spring break safety and sexual assault awareness. The department publishes related content to Facebook and YouTube in order to educate students and the rest of the university community.

On Feb. 26, University Police, in collaboration with Residence Life and Housing, took its prize patrol unit to South Hall, where an iPad was presented to this year’s winner, freshman Jessica Lenoch. Everyone in the residence hall who participated in the event enjoyed a free T-shirt and buffalo wings.

University Police would like to thank everyone for participating and liking its Facebook page. We look forward to next year’s drawing, so spread the word.