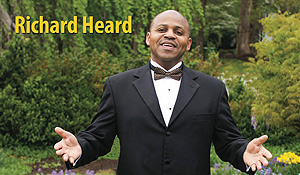 Price (1887-1953) was born in Arkansas and later moved to Chicago. In 1933, the Chicago Symphony Orchestra performed her “Symphony in E Minor.” During her lifetime, she wrote more than 300 works. Her most famous song, “My Soul’s Been Anchored in the Lord,” was sung by many popular singers of her time.

Heard says he selected Price because of the beautiful spirituals she arranged, and the wonderful settings of the poetry in her art songs. “After researching more about Florence at the University of Arkansas, I found she was a warm and humble person, and I couldn’t think of a better way to show tribute to this composer than to record her songs.”

Many of the songs on this CD are unpublished and have never been previously recorded. Heard will be editing an anthology of these works in the near future.

Heard made his European debut in December 1994, performing concerts in Merzig, Emden and Berlin. He has performed at over 50 universities in the United States.

Heard joined Wake Forest in 1996. The CD will be available in the Wake Forest University bookstore.