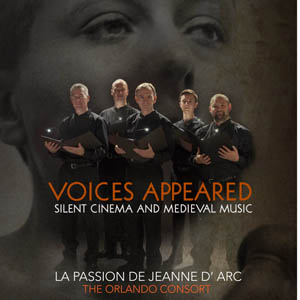 Experience a stunning evening of film and music that blends the riveting last days of Joan of Arc with vocal music from her time. On Thursday, April 7, the Secrest Artists Series welcomes early-music vocal ensemble Orlando Consort. They will create a live musical soundtrack to one of the classics of the silent cinema— Carl Dreyer’s “The Passion of Joan of Arc.”

Enrich your concert experience by joining our pre-concert talk at 6:40 p.m. The talk will be led by Woody Hood, director of film studies and professor of communication at Wake Forest.

The performance will begin at 7:30 p.m.  It is entitled, “Voices Appeared: Silent Cinema and Medieval Music–The Passion of Joan of Arc” with the Orlando Consort.

In October, The New Yorker selected Orlando Consort’s performance as the thing to do that weekend. The New York Times hails performances by the ensemble as “… staggeringly beautiful.”