A Message of Encouragement from Dean Jonathan L. Walton

This message was sent to faculty, staff and students on April 2, 2020.

One of the great joys in life is being part of a team, working together toward a goal that none could accomplish independently. In times of challenge, a team is tested and shows its true character. As we continue to navigate the complexities of COVID-19, I am extremely grateful to be part of the Wake Forest team with all of you.

Recently, one member of our team, Jonathan L. Walton, Dean of the Chapel and Dean of the School of Divinity, shared an encouraging word with several of us. After being uplifted by his message, I thought it would be equally edifying for the greater Wake Forest community.

Wherever this video message finds you, I hope you will be encouraged.

This is a challenging time for all of us, but together, we will endure this season and come out stronger on the other side.

On this day in 1951, President Harry Truman helped Wake Forest College break ground on a new campus in Winston-Salem. That historic moment, made possible by an act of incredible philanthropic support by the Reynolds family, expanded the horizons for what would become a nationally admired institution of higher education. Today, philanthropic support again gives us occasion to celebrate a historic milestone in the life of Wake Forest University. I am humbled to announce that the Wake Will Lead campaign has surpassed the $1 billion milestone thanks to the generosity of alumni, parents and friends.

A $1.5 million gift from Arnold Palmer’s Trust to endow a professorship in literature pushed the campaign past this noteworthy mark. I am pleased to announce that Dean Franco, who has taught in the Wake Forest English Department since 2001 and currently serves as the Director of the Humanities Institute, will be the first to hold the Winifred W. Palmer Professorship in Literature. The endowed professorship, named in memory of Mr. Palmer’s late wife, is one of 52 endowed positions established during the Wake Will Lead campaign.

In his 2005 Commencement address, Mr. Palmer shared that at Wake Forest he learned about “the meaning of a productive and meaningful life.” While most people know Mr. Palmer as an iconic sports figure, an uncanny knack for bringing people together contributed as much to his meaningful and productive life as his athletic prowess. Mr. Palmer personified friendliness and honor, and the stories from his life and career with which he often regaled eager listeners emphasized the importance of relationships. Connecting the memory of Arnie’s beloved Winnie with his beloved alma mater is a fitting way for us to mark this milestone in a campaign that has united so many people.

With support from nearly 60,000 Wake Forest families and friends, the momentum behind this campaign will continue to create opportunity, educate the whole person and inspire excellence. In July, when the campaign has officially concluded and we account for the full influence of our community’s generosity, I believe that the most significant impact will not be calculated by what the University has received, but will be felt by what Wake Forest gives back to our world.

Please join me in celebrating this moment, and please accept my most sincere gratitude for your belief in Wake Forest.

This announcement was e-mailed to faculty and staff on Oct. 22 by Communications and External Relations:

At the invitation of the Faculty Senate and Senate President Wilson Parker, President Nathan Hatch will discuss the State of the University on Thursday, Nov. 1, at 4 p.m. in Brendle Recital Hall.

This year’s address will incorporate a new format where President Hatch and campus leaders will engage in a conversation about various aspects of the University. All are invited to the State of the University event and a reception that will immediately follow in the lobby of Brendle Recital Hall.

President Hatch emailed this message to students, faculty and staff on Jan. 23:

Earlier today, you received an update from the Winston-Salem Police Department about three men detectives seek to interview as part of their ongoing investigation. Anyone with information regarding the whereabouts of the men depicted in the photographs is asked to call the Winston-Salem Police Department (336-773-7700) or CrimeStoppers at (336-727-2800).

In addition to calling attention to the update provided by the Winston-Salem Police Department, I also want to address a few concerns and rumors we have heard on and off campus.

The past few days have left our campus community unsettled. I am grateful for the many ways in which Wake Foresters have united to support one another.

A vigil to honor Najee Baker will be held at the Winston-Salem State Clock Tower on Wednesday from 5-6 p.m. Wake Forest will operate a shuttle on a first come, first served basis that will depart the Benson University Center Circle at 4 p.m.

My thoughts and prayers continue to be with the family and friends of Najee Baker. We will continue walking with our friends at Winston-Salem State as we work to help our communities heal.

President's Ball to be held Sept. 15 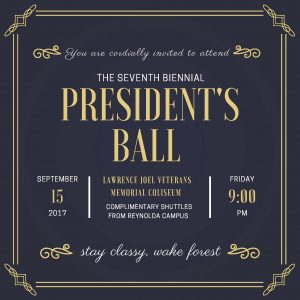 The biennial ball began in 2005 to celebrate the inauguration of President Nathan O. Hatch, and brings together hundreds of Wake Forest community members during Homecoming weekend.

The semi-formal event is open to students, faculty, staff and alumni, who may also bring guests. No tickets or preregistration is required, but current Wake Forest community members are required to bring their Wake Forest ID.

Parking will be free at the Coliseum. Complimentary shuttles will be running continuously from the Reynolda campus, behind Poteat Residence Hall (Parking Lot P), beginning at 8:30 p.m.