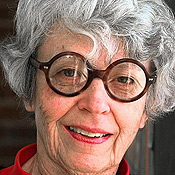 Her large body of work includes portraits of former Wake Forest President James Ralph Scales, former Dean of the College Tom Mullen and former Dean of Women and Associate Vice President Lu Leake. A retrospective of some of her work – geometrically focused abstract works made between 1963 and 1978 – was already scheduled to be shown from Oct. 22 though Dec. 7 in the Hanes Art Gallery in the Scales Fine Arts Center.

Read more about Shields in the Winston-Salem Journal »