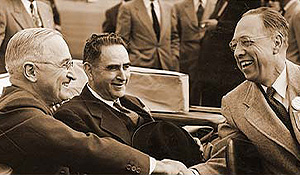 Oct. 15 marks the 60th anniversary of the groundbreaking for Wake Forest’s campus in Winston-Salem.

In 1951, Wake Forest President Harold Tribble was looking to do something that would send a clear signal that the move from Wake Forest, N.C., was going to happen. He parlayed Gordon Gray’s contacts from his time as a White House assistant (the move was Gray’s idea), along with the influence of alumnus Gerald Johnson (1911), an esteemed columnist for the Baltimore Sun, into securing the President of the United States, Harry S Truman, as speaker.

At the groundbreaking ceremony, Truman delivered an important foreign policy address covered by the nation’s media.

Read more about the groundbreaking and the transition to Winston-Salem »