Comings and goings for May 2017

See a list of employees joining and leaving the University in May 2007:

Chinese Lunar New Year to be celebrated on campus Feb. 13 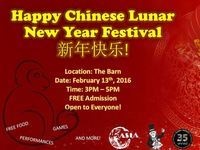 The Chinese Lunar New Year Festival will be held at The Barn from 3 p.m. to 5 p.m. Feb. 13.  The event is free and open to the public.

Organizers extended an invitation with the following message:

Come and celebrate Chinese New Year’s here at Wake Forest.  Have a taste of traditional home-cooked food that represents the holiday, witness and be entertained by a variety of live performances provided by our (Wake Forest) students and the community as well as have fun with all the activities and games.

ASIA (Asian Student Interest Group) has organized the event with support from several University departments, including East Asian Languages and Cultures, as well as Multicultural Affairs.

Yasuko Takata Rallings, Wright Family Faculty Fellow and associate professor of the practice in Japanese in the Department of East Asian Languages & Cultures, chaired the 49th Annual Fall Conference of the Foreign Language Association of North Carolina in late October in Durham.