James Dunn: Invested in the Next Generation

This story written by C. Mark Batten was originally posted on the School of Divinity website. 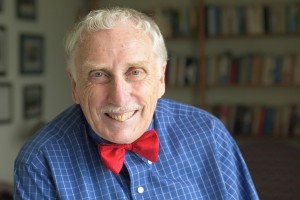 James Dunn, who was a champion of religious liberty and the separation of church and state, passed away on July 4 at the age of 83. For Wake Forest University School of Divinity, Dunn was a teacher and mentor with an inspirational ingenuity and comedic wit.

Dunn served as resident professor of Christianity and public policy from 1999 until his retirement in 2014. He taught courses on Christian Ethics and electives on the Church and State in America, Christianity and Public Policy, and God and the New York Times.

Many of Dunn’s courses involved travel to Washington, D.C., giving Divinity students the opportunity to meet with national, political religious leaders, many with whom Dunn had developed lasting relationships when he served as executive director of the Baptist Joint Committee for Religious Liberty (1981-1999). These courses have given lasting memories to students of James Dunn and the role of religion in the public sphere.