Wake Forest University will be participating in the third ACCelerate: ACC Smithsonian Creativity and Innovation Festival to be held in Washington, D.C. on April 9-11, 2021 during the cherry blossom festival. Attendance is expected to exceed 60,000.

We are seeking exciting transdisciplinary projects to represent the University at the Smithsonian National Museum of American History.  Projects involving WFU/faculty/student/community teams are highly encouraged. Projects submitted will be evaluated based on completion/readiness and the potential to actively engage the festival audience.

The timeline is as follows:

Support from the Office of Provost will be available to help with the creation and transportation of the exhibits and exhibitors.

The first ACCelerate festival was on October 13-15, 2017 and second was held April 5-7, 2019. To learn more about the previous Festivals, please visit http://acceleratefestival.com/.

Please complete this form with as much detail as you can provide.  We understand that you may not be able to answer all questions by the deadline. For more information, contact Tim Pyatt at tpyatt@nullwfu.edu or 758-5094, or Andrea Ellis at ace@nullwfu.edu or 758-4322.

Provost Rogan Kersh emailed the following announcement to faculty and staff on Jan. 10:

On Thursday, January 16, Hof Milam, Executive Vice President, and I will be hosting the second Campus Connections of the academic year. We look forward to seeing you in Benson 401 from 8:45-10 a.m. for a light breakfast and presentations by members of our Wake Forest community. 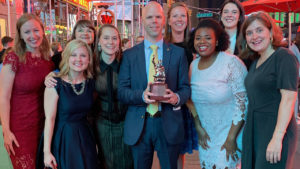 This is a guest post from the organizers of the ACCelerate: ACC Smithsonian Creativity and Innovation Festival:

Wake Forest  is seeking projects for the second ACCelerate: ACC Smithsonian Creativity and Innovation Festival to be held in Washington, D.C. on  April 5-7, 2019 (dates still tentative).

We are seeking exciting transdisciplinary projects to represent the University at the Smithsonian National Museum of American History.  Projects involving WFU/faculty/student/community teams are highly encouraged.  Projects can be submitted through an online survey. They will be evaluated based on completion/readiness and the potential to actively engage the festival audience.

The timeline is as follows:

Support from the Office of Provost will be available to help with the creation and transportation of the exhibits and exhibitors.

The first ACCelerate festival on October 13-15, 2017 drew a crowd of 36,000 participants. We are anticipating and equally impressive turnout in 2019.  To learn more about the 2017 Festival, please visit http://acceleratefestival.com/.

Much preparation leads to Wake Forest participation in ACCelerate

After a year of much planning, Tim Pyatt and Andrea Ellis are looking forward to a special Atlantic Coast Conference event in mid-October that showcases Wake Forest in a setting other than on a playing field or a court.

Pyatt, dean of Z. Smith Reynolds Library, and Ellis, assistant vice president of innovation, served on the ACC steering committee that helped organize the first “ACCelerate: ACC Smithsonian Creativity and Innovation Festival.”  Presented by Virginia Tech and the Smithsonian’s National Museum of American History, the ACCelerate Festival is a three-day celebration of creative exploration and research at the nexus of science, engineering and design.

The event is free and showcases the 15 universities of the ACC.  It gives all of the universities an opportunity to display their work to each other and to the public.  In addition to the 47 featured interactive installations, the festival will include panel discussions and performances through the three days.

Representing Wake Forest, Pyatt and Ellis began last October serving on the steering committee comprised of members from all ACC universities.  By November, they had proposed the Wake Forest projects for the festival.  And, after considerable deliberation, the final decisions were made later on which projects would be selected for showcasing at the festival.  Throughout the summer, they have worked to settle the numerous details and logistics required to make it a successful event.

Asked how the public will respond to the Wake Forest exhibits and presentations, Pyatt replied, “All are amazing in their own way.”

The Wake Forest exhibits and presentations include:

“Wake the Vote is so relevant and timely while IMPROVment epitomizes the Wake Forest ethos — bringing liberal arts and medicine together for the good of society. The Story of My Life celebrates six disabled adults and their personal stories. And What is Language combines humanistic research with data analysis. I think the public will be impressed by the impact of research at Wake Forest on society,” Pyatt said.

For more about ACCelerate, read here.