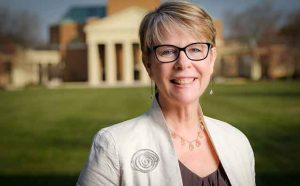 Mary Tribble (’82, MA ’19), senior advisor for engagement strategies, has announced a phased retirement beginning in January 2023. Tribble has led the Office of Alumni Engagement since 2014, generating new opportunities for alumni to connect with Wake Forest and each other.

Tribble will transition out of her role overseeing the Alumni Engagement team by the end of this calendar year. Kelly McConnico will lead the team in her role as Assistant Vice President. Before her full retirement in September 2024, Tribble’s time will be devoted to strategic projects, exploring new areas of engagement for Wake Forest stakeholders.

“Mary has led Alumni Engagement with passion and creativity for the past eight years,” said Vice President of University Advancement Mark Petersen. “Homecoming provided the most visible evidence of her significant impact at Wake Forest with several thousand alumni returning to campus to celebrate their love for each other and their alma mater.”

Tribble returned to her alma mater after a remarkable career as a nationally recognized, award-winning special event planner and a sought-after communications consultant. As the great-great-great-great-great-granddaughter of Wake Forest’s founder and first President Samuel Wait and the great niece of former President Harold Tribble, Mary Tribble merged her professional expertise and personal passions with outstanding results. Under Tribble’s leadership, the Alumni Engagement team upgraded the Homecoming experience and initiated Party So Dear, which is now the largest annual gathering of alumni with nearly 4,000 in attendance each year, and increased alumni engagement throughout the year with new affinity groups and programs.

“I am excited about this new chapter and look forward to seeing other leaders grow and transform University Advancement in the coming years,” said Tribble. “It’s been an incredible ride with incredible people and I’m grateful for my time leading the Alumni Engagement team.”