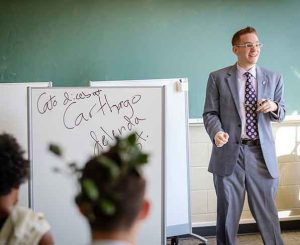 The National Endowment for the Humanities has awarded T. H. M. Gellar-Goad, Associate Professor of Classics, and his collaborator Christopher B. Polt (Boston College) a $224,081 grant to run an Institute for Higher Education Faculty in Summer 2023 on “The Performance of Roman Comedy.” This grant is the largest-ever federal grant earned by a humanities professor at Wake Forest University. The National Endowment for the Humanities (NEH) announced in August that it had awarded $31.5 million in grants for 226 humanities projects across the country.

“I’m so excited about this institute, which will bring 17 of the world’s foremost experts on ancient theater into dialogue with thirty faculty and grad students from across the country. The work we do in Boston next summer — culminating in video recordings of experimental performances of Roman comedy using ancient and modern methods — will have far-reaching effects on how we understand, read, perform, and teach Roman drama,” Gellar-Goad said.

Gellar-Goad has also received this year’s Leadership Award from the Women’s Classical Caucus (WCC). The WCC is one of the longest-serving affiliate organizations of the Society for Classical Studies, the principal society in North America for the study of ancient Greek and Roman languages, literatures and civilizations.