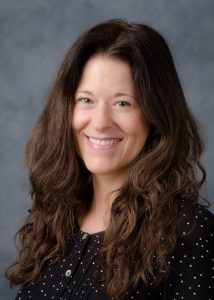 Wake Forest poet and professor Amy Catanzano is currently profiled in online magazine Symmetry, which describes itself as the place where readers can “get the latest news, meet people behind the scenes, and get the background information you need to gain fluency in the language of particle physics.”

Some Symmetry readers may be surprised, initially, to find a poet on the magazine’s cover, but they will not be for long once they start reading the lengthy profile written about Catanzano, who is associate professor of English, poet-in-residence and co-director of the Writers Reading Series.

As the magazine article explains, “Catanzano is an unusual poet.  She has developed and practices a theory of poetry called ‘quantum poetics’ in which she explores poetry in parallel with particle physics, astrophysics and quantum theory.”

Earlier in her career, “Catanzano began bringing science into her poetry after exploring poetry as a ‘philosophical investigation,’ a step that she says drew her into thinking about how poems negotiate time.  That brought Catanzano to physics and Albert Einstein’s theories of special relativity and general relativity.”

As her career has evolved, the poet who has taken only one physics class (and, that was in high school) has read extensively and widely about physics and travelled the United States and the world conducting research for her poetry and visiting some of the most interesting particle physics and astrophysics sites,” according to the article.

The Symmetry article is available to read here.