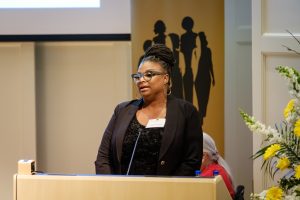 Melva Sampson, assistant professor of preaching and practical theology in the School of Divinity, recently received the Louisville Institute’s First Book Grant for Minority Scholars for her project entitled “Going Live!: Black Women’s Proclamation in the Digital Age”. This award will provide for a sabbatical for the fall 2020 semester.

Sampson is a practical theologian and ordained minister. Her research interests include black preaching women’s embodiment, African heritage spiritual traditions, black girls’ ritual performance, and the relationship between digital proclamation and spiritual formation. She is the creator and curator of Pink Robe Chronicles™ and Raising Womanish Girls™, both digital platforms used to elucidate the role of sacred memory and ritual in the collective healing of marginalized communities.

The Louisville Institute’s First Book Grant for Minority Scholars enables junior, tenure-track religion scholars of color to complete a major study that contributes to the vitality of Christianity in North America. Grants of up to $40,000 support year-long research projects that will lead to the publication of a first (or second) book.

Louisville Institute is funded by the Religion Division of Lilly Endowment and based at Louisville Presbyterian Seminary (Louisville, Kentucky). The Institute’s fundamental mission is to enrich the religious life of North American Christians and to encourage therevitalization of their institutions, by bringing together those who lead religious institutions with those who study them, so that the work of each might inform and strengthen the other.