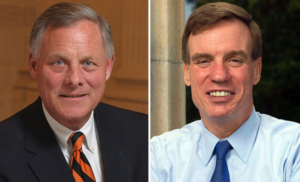 Sen. Richard Burr (R-NC) and Sen. Mark Warner (D-VA) will have a conversation at Wake Forest on Monday, Nov. 11, in Farrell Hall’s Broyhill Auditorium at 7 p.m.

Kami Chavis, Professor of Law and Director of the Criminal Justice Program at Wake Forest University School of Law, will moderate the discussion.

The event is free and open to the public. Media are welcome to attend.

From investigating Russian election interference to highlighting ongoing cyber threats, Burr and Warner have collaborated on some of the most contentious issues facing the U.S. When disagreements arise, Burr said they are settled by “picking up the phone or getting together and talking things through.” The discussion will highlight how two leaders from opposite sides of the aisle are able to work together on issues of national importance.