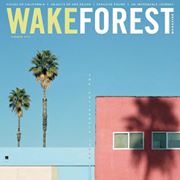 Wake Forest Magazine received four of the awards, including the the Robert Sibley Award for best general interest magazine in all categories from CASE.

The Circle of Excellence Awards recognize outstanding work in advancement services, alumni relations, communications, fundraising and marketing.  The awards are open to professionals working at member colleges, universities, independent schools and their affiliated nonprofits around the world.