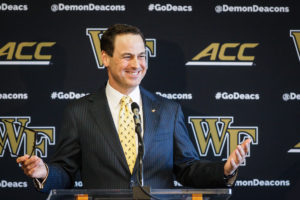 As announced in March, Currie is a 1993 Wake Forest graduate who served his alma mater for six years in the 1990’s as assistant director of the Deacon Club, and assistant AD. He has nine years of service as a NCAA Division I level athletics director, at Kansas State University from 2009-17 and most recently at Tennessee.

Regularly sharing news with fans will be a priority for Currie. This morning, he sent his first message to Demon Deacon fans, which is available online here. Faculty and staff who would like to subscribe to future emails from Currie should email wfsports@nullwfu.edu.