Service for Life Trustee Bert Bennett to be held July 19 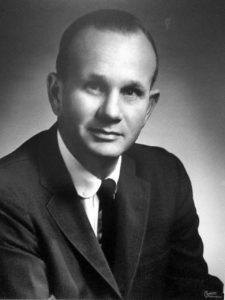 He served on the Wake Forest University Board of Trustees from 1982-1985 and in 1987, Wake Forest awarded Bennett an honorary doctorate and elected him as a life trustee.

A graduate of the University of North Carolina at Chapel Hill, Bennett served in the U.S. Navy during World War II before joining his family’s business, Quality Oil Company. Under his leadership, it became one of the largest branded oil jobbers in the United States, in addition to owning and operating convenience stores, hotels and other businesses. Bennett retired as director of the company in 1996 and was succeeded by his son, Graham Bennett, who has served for many years on the Wake Forest University Health Sciences and Medical Center Boards.

A funeral service will be held at St. Paul’s Episcopal Church in Winston-Salem on Thursday, July 19, at 11 a.m.

In lieu of flowers, memorials may be made to Wake Forest University, Forsyth Technical Community College or St. Paul’s Episcopal Church.