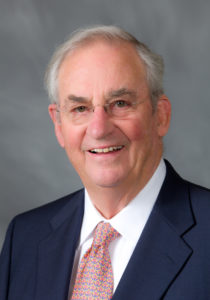 Wake Forest University Life Trustee Marvin Gentry, whose extensive and profound service to the University was recognized with the Medallion of Merit, died July 14 in Winston-Salem.

A 1957 graduate of Wake Forest, Gentry was the retired CEO, president and board chairman of Fortis Homes, a residential real estate development company he founded in his hometown of King, N.C.

First elected to the Wake Forest Board of Trustees in 1989, he completed five terms, including continuous service from 1994 to 2007. In addition to service on several board committees, Gentry served as Chair of the Health Affairs Committee for 10 years and from its inception in 2001 through 2007 was the Chair of the Wake Forest University Health Sciences Board. He remained active on the Health Sciences Board as a Health Affairs Committee life trustee member since 2008.

“His understanding of our healthcare enterprise and his strong leadership in the integration of our Medical Center’s component organizations were critical to its success,” said President Nathan O. Hatch.  “We will always be grateful for Marvin’s far-reaching contribution to his alma mater in the monumental effort to create a unified medical center.”

In 2007, he was elected a Life Trustee and in 2009 was awarded the Medallion of Merit, Wake Forest’s highest award for service.

Two of his children, Ted Gentry (’83) and Priscilla Gentry Wood (’89), are graduates of Wake Forest.

A memorial service has been scheduled for Saturday, July 21, at 11 a.m. at Knollwood Baptist Church in Winston-Salem.

An obituary with additional information is in the Winston-Salem Journal.