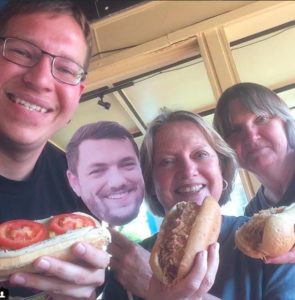 John Champlin, assistant director of the Professional Development Center, raised more than $5,000 for the Chaplain’s Emergency Fund on a nationwide hot dog tour.

Fueled by his love for the simple frankfurter and a desire to support community members in need, Champlin drove from Virginia Beach, Va., to Marina Del Ray, Calif., on a “Tour De Frank” from May 24 to June 2.  He concluded his adventure in Las Vegas.

Tour stops ranged from restaurants participating in the hot dog renaissance to classic hot dog joints, including Hillbilly Hot Dogs in Huntington, W. Va., which was featured on the Food Network show “Diners, Drive-Ins, and Dives.”

“When selecting where to stop, I really wanted a mix of old school and new school; places that only have a few traditional toppings and some with more unusual options like mac and cheese, alfredo pasta, and even kimchi,” said Champlin.

“The fund is important because it provides limited financial assistance to Wake Forest community members in times of disaster or personal emergency,” said University Chaplain Tim Auman. “Every dollar we receive makes a difference.”

Champlain launched “tourdefrank” on Instagram in 2014, where he has been sharing pictures of the hot dogs he samples. Details of the trip can be read at tourdefrankhotdog.blogspot.com.