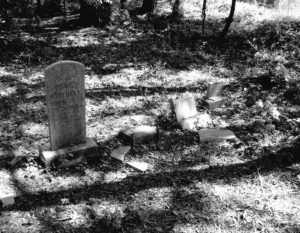 The North Carolina Museums Council has presented an Award of Excellence to the Wake Forest Historical Museum for a 2017 survey of a historic cemetery in the Town of Wake Forest associated with a church formed by former slaves soon after the Civil War.

The survey was conducted with many purposes, including protection of the cemetery and education of the community about its importance in the history of the area.  The cemetery is known as the “Old Cemetery” of Friendship Chapel Missionary Baptist Church.  It was the congregation’s first cemetery and was used for about 70 years starting in the 19th Century and continuing into the 20th Century.

Funded by the Jandy Ammons Foundation, the survey was administered by the Wake Forest Historical Association, which had proposed the project to the foundation.  The historical association is an offshoot of the Wake Forest College Birthplace Society, the non-profit organization responsible for the museum.

The survey was conducted by New South Associates, which specializes in such work. Employing ground penetrating radar, a non-invasive technology, New South located and documented nearly 600 burials and one mass grave.  Many of the burials were no longer marked in the cemetery.  A substantial number of the burials had been marked originally with rocks or wood from nearby fields.

The Award of Excellence is intended to honor exhibits, publications and programs that exemplify excellence in the museum field. It was presented to the museum on March 18 in Greensboro at an annual conference of the North Carolina Museums Council.

The survey project has won other awards, previously, including the 2017 Anthemion Award from Capital Area Preservation, a non-profit organization dedicated to historic preservation.  Recently, the Town of Wake Forest designated the “Old Cemetery” a local historic site.